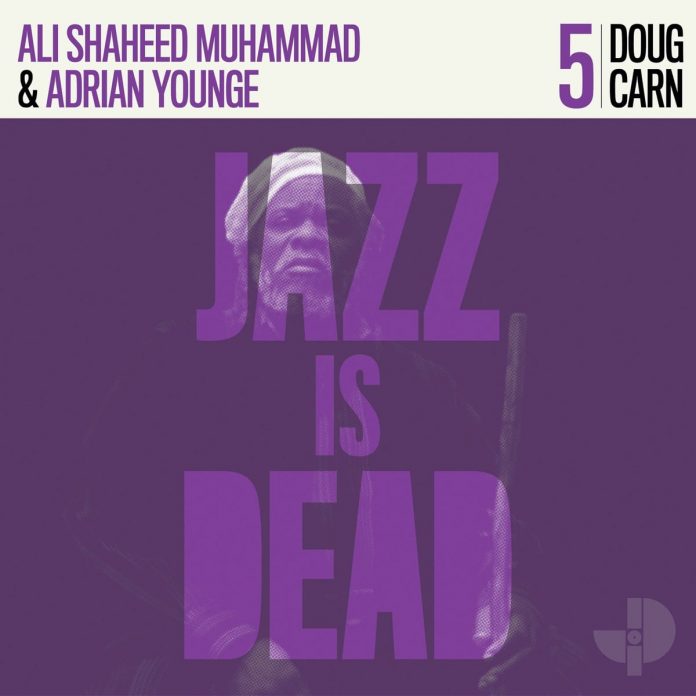 The 005 tag may be the giveaway but this is the fifth release in the superb Jazz Is Dead series. The concept is simple. Take a collection of established artists like Roy Ayers, Doug Carn, Marcus Valle and Azymuth – and then add a couple of young and talented music producers from a completely different musical background. The result is a brand-new take on an old theme.

It clearly wasn’t as simple as that. For a start there had to be mutual respect. Adrian Younge and Ali Shaheed Muhammad (the young and talented producers) had their own hit list of musicians they wanted to work with. This included all of the above. As Muhammad said in an interview with Rolling Stone “We want them to feel the love for what they have given us in a time where a spotlight may not be shining brightly on their works.” But not all established musicians want to work with younger producers from outside their particular genre. There have been successes in the past (Johnny Cash and Rick Ruben) and there have been failures. The latter get less publicity as the recordings invariably get canned. But it does take a brave and confident jazz musician to throw yourself into the hands of a former DJ and a rapper. For this album the spotlight fell on Doug Carn.

Doug Carn is an American multi-instrumentalist jazz musician. Now aged 72, he is best known for his work on keyboards – particular the Hammond B3 and piano. Carn recorded extensively for the Black Jazz Records label in the 1970s, releasing the albums Infant Eyes (1971), Spirit Of The New Land (1972), Revelation (1973) and Adam’s Apple (1975). A number of these albums are still widely sought after and collected by crate diggers. He has worked and collaborated with a variety of artists including Shirley Horn, Stanley Turrentine and Earth, Wind & Fire. In 1997, he recorded the album Bongopop with a number of other jazz organists (including Lonnie Smith and Joey DeFrancesco). Prior to this new work, recordings have been sporadic, the album My Spirit being released in 2015 and Free For All in 2019.

Adrian Younge is an American composer, arranger and producer. Best known for hip-hop and rap, Younge is based in Los Angeles. He began playing bass and keyboards in bands during the 1990s before turning his talents to the recording studio. Younge also owns a vinyl record store in Los Angeles. Ali Shaheed Muhammad is an American hip-hop DJ, producer and rapper. A native of New York and a longstanding member of the hip-hop group A Tribe Called Quest, he also now resides in Los Angeles. Muhammad and Younge have worked together since 2013, writing and recording their own material as well as producing other artists.

The Jazz Is Dead project began in 2017 as a series of concerts. “I thought the name was bold, provocative and exactly what was needed to stir things up” Muhammed is reported to have said. In 2020 the project became a record label with the release of Jazz Is Dead 001, an old-fashioned compilation album of all their favourite jazz heroes and featuring Roy Ayers, Gary Bartz, Brian Jackson, Joao Donato, Doug Carn, Marcus Valle, Azymuth and the Midnight Hour. I used to really love compilation albums as a teenager and wouldn’t it be great to see the concept return as a way of labels showcasing their full stable of artists?

This album is keyboard driven throughout, but this is no Jimmy Smith “soundalike” album. Wind instruments, drum and bass are all up there in the mix. The drumming of Malachi Morehead is particularly outstanding as are the wind section. With extensive playing on the Hammond B3 organ by Carn, it is inevitable that the album has a certain retro feel to it, but it is certainly not stuck in the past. There is a fresh, modern feel to the arrangements (courtesy of Younge and Muhammad) and real funk and vibe about the sound. It is difficult music to categorise as there are elements of R&B, blues, funk, soul, Latin, fusion and modern jazz in there.

Younge and Muhammad have certainly given Carn a new lease of life whilst respecting his legacy. This could have been an album dominated by the arrangements and production – but it isn’t. Carn comes out of this album with all his musical credibility intact, whilst Younge and Muhammed get my full admiration. It would be fatuous to suggest that the Jazz Is Dead series has revived a jaded jazz scene, but it has certainly taken a step in the right direction.

Steve Voce - 10 October 2020
The Parker quartet album I review elsewhere (Bird’s Nest 244105), although not necessarily his greatest, reveals that Parker was assuredly the most daring soloist that jazz has produced and...

Nic Jones - 13 January 2021
If anyone has a stronger claim to being a missing link between David Bowie and Bessie Smith than Dana Gillespie then I don't know of them. She was a...