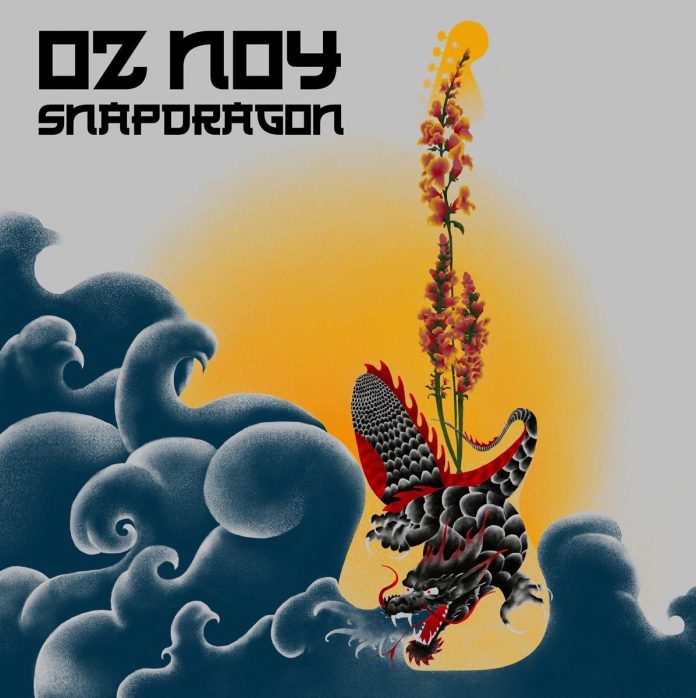 In the programme notes for a gig Oz Noy played in London to promote his 2016 Who Gives A Funk album, the guitarist described his music as jazz without sounding like jazz. Well, four years and as many albums on, that quirky summary from the Israel-born New York resident still stands. Of course, those familiar with Noy’s music would concur that it’s the blues that defines him as a guitar player. But what makes him so compelling is his non-purist approach to the blues, his radical technique, creative use of effects and spunky shifts into jazz and multiple other musical genres.

With its slick Japanese arty sleeve, Snapdragon is something like Noy’s 11th solo album and comes hot on the heels of last year’s brilliant Booga Looga Loo. Noticeably more muscular in production and sundry in style, it fast plays as one of his finest discs to date and features all the usual A-listers Noy employs to rock, rumble and swing under his axe. The new set opens with the funky Looni Tooni and powerhouse drummer Dennis Chambers playing a heavy, Cold Sweat-style groove licked with organ and a buttery line from bassist Will Lee. Noy’s phrasing in unison with trumpet here is clean and choppy at first, but quickly adopts a more growly, bluesier tone that soars to a scream during his solo.

Tired But Wired follows and couldn’t be more suited to its title sonically. The band plays over a slow displaced beat from Vinnie Colauita which makes for a giddy listen at first, especially against Noy’s equally wobbly motifs on Strat. What Chris Potter later injects on soprano saxophone though brings greater balance to the groove and instrumentation, subtly easing what some listeners might hear as rhythmic tension. Outer Look is more cordial, an early highlight of the set. The track is significant in that it’s also reportedly the last cut recorded by trumpeter Wallace Roney before his untimely passing this year. With Colaiuta and bassist John Patitucci bouncing between funk, swing and pointy stab sections, Roney plays hard and with passion, his tone and bluesy phrasing at times recalling his mentor Miles Davis.

It’s become a ritual for Noy to record covers by classic artists – James Brown, the Beach Boys, the Meters, Prince and Mingus to name a few – and this one offers up some greats too. Over a slow but intricate bossa groove from drummer Dave Weckl and bassist James Genus, he pays homage to Monk with an experimental reading of the pianist’s Evidence and, later, an alternate, more reggaefied, Bemsha Swing, reappearing from Booga Looga Loo. Hipper still is an inspired arrangement of the Rod Argent-penned Zombies hit She’s Not There, which, over an earthy rumba feel, spotlights Noy’s blues-rock chops, not to mention his flair for widdly, whammy-barred pitch tricks.

Overall, it’s the diversity, master playing and vibe of Noy’s fresh new material that makes this record though. Through Grooving Grant he gets to trade fret licks with Adam Rogers over a killer shuffle, pay more respect to his beloved boogaloo during Boom, Boo Boom and deftly nod to Hendrix’s Manic Depression through the twisted blues of the title track. Who gives a funk if it’s not strictly jazz?

Gareth Thomas - 05 January 2020
Beyond its title, Music For An Imaginary Surf Film requires little explanation as to the mood it is trying to capture; portraying images of sea, sand and surfing has...