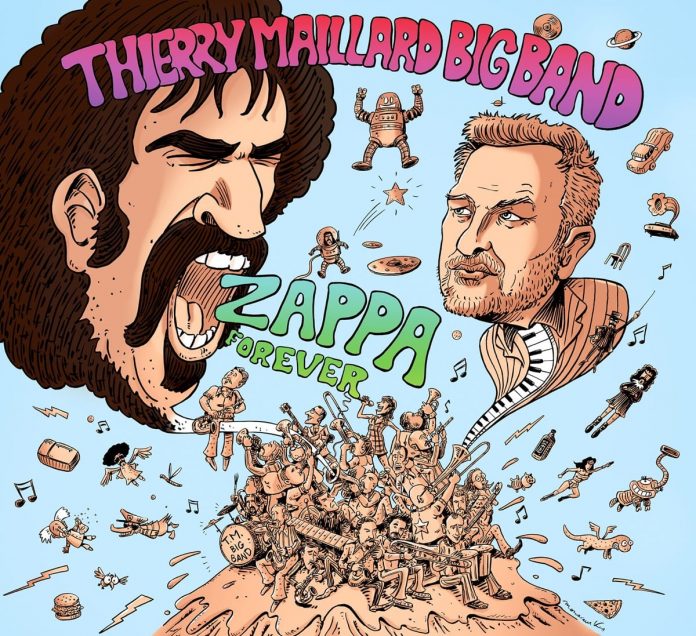 Composer and pianist Thierry Maillard has released a number of albums over the past 20 years, covering both the worlds of jazz and classical music, and his latest is a homage to Frank Zappa. In total, 23 musicians feature on the album, including several well known names such as saxophonist Chris Potter and guitarist Gilad Hekselman.

The album opens with a soundbite of Zappa critiquing the superficiality of the music industry and the traditions of orchestral music, stating “just because a guy’s got a tuxedo on, is no sure sign that he’s an artist or a fine person”, in his usual dry tone. And so begins the first track, Zappa Forever. Beginning with a spoken word passage from Camille Bertault, and standing at just shy of 14 minutes long, it covers a range of styles, from grooving bass and drums to complex horn-section arrangements, and some very Zappa-esque marimba playing from Franck Tortiller. The complicated use of the horn section to lead on Les 4 Éléments is very reminiscent of Zappa, and there is a guitar solo, although it is more in a jazz style, with winding chromatic runs, rather than in unrelenting, overdriven Zappa fashion.

Alongside the Zappa influence, Maillard’s jazz influences stand out prominently, particularly on Planète Mars and The Wall. On the second disc, this continues with the first track, Island, and its jazz vocal intro over spacious ensemble playing, and on Between The Earth And Sky, via an excellent saxophone solo from Chris Potter.

Nonetheless, much of what can be considered key in Zappa’s musical palette is present – odd time signatures, fast melodic runs and complex instrumentation, with tracks seemingly made up of an impossible number of different musical parts. The album is almost entirely acoustic, and so some of the dimensions that define the Zappa discography, wailing electric guitars at one end and the mind-bending Synclavier at the other, are missing. Instead, Maillard’s influence, as the album notes state, is the time during which Zappa worked with Pierre Boulez. Maillard’s album is stylistically much less modern than the Boulez album and also draws from Zappa’s other uses of the orchestra, which were intermittent throughout his career, from his debut solo album, Lumpy Gravy, to Orchestral Favorites and the two volumes of London Symphony Orchestra.

A two-disc release, the album folds open to reveal illustrations of Maillard and Zappa, as well as an extensive booklet detailing personnel, credits including each track’s soloists, photographs of the band, as well as more drawings. On an incredibly complex recording, Maillard manages to combine both his own originality and skill with his love of Frank Zappa, and achieves a fantastic result.

Barry Witherden - 28 December 2019
Coin Coin is a multi-media project examining Roberts’s Afro-American family history and experiences over several generations. When I interviewed her by email for a Jazz Journal profile back in...