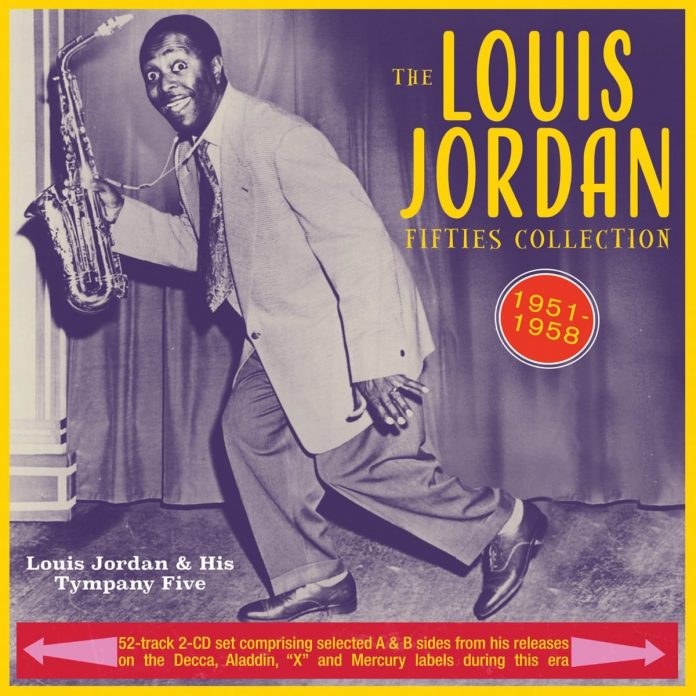 The Louis Jordan Collection 1951-1958 is the final follow-up to the Acrobat releases Jukebox Hits 1942-1947 and Jukebox Hits 1947-1951. It is equally extensive, featuring 52 tracks on two CDs that come in a plain package including quote-heavy but insightful liner notes. Fifty-two seems a rather staggering amount, but in the case of Louis “The King of The Jukebox” Jordan, it incredibly enough is peanuts.

The 1940s were the glory years of Jordan, who came up in Harlem, New York through the band of drummer Chick Webb. From 1942 to 1947, Louis Jordan & The Tympany Five strung together hit after hit. To be precise, Jordan had 12 number one records between ’42 and ’50 and 13 records in the top three in 1946, the year six singles moreover reached the number one spot. Abundant proof that Jordan was the most popular entertainer in the black community which during segregation depended on the so-called “race music” market; Jordan periodically crossed over to the white pop chart as well, notably with G.I. Jive. By 1955, Jordan had become yesterday’s news, overtaken by rock ’n’ roll, which paradoxically the singer and alto saxophonist had pioneered so vividly. He was equally prolific in the 50s but those records failed to reach chart success and thereafter Jordan recorded fitfully until his untimely passing in 1975.

Jordan merged a hip and witty jump blues style that drew on the vaudeville antics of Fats Waller and the devices of the swing bands and consisted of accessible songs that were tailor-made for the latter-day blue-collar audience. The reason why Jordan was so impressively at the top of the heap in the 40s must be attributed not only to his themes of booze, money, lust and food, dynamic vocals and uncommonly gritty sax playing, but also to the quality of his bands, which among others featured pianists/organists Wild Bill Davis and Bill Doggett, guitarist Bill Jennings and drummer Christopher Columbus. Jordan was a big influence on Ray Charles and Chuck Berry and his five or seven-piece band became the template for the modern rhythm & blues outfit.

Most of Jordan’s hits were on Decca, which, even when revenues eventually dried up, stayed loyal to Jordan until 1953. The Louis Jordan Collection 1951-1958 includes 28 songs of his final period on Decca. He is hilarious (Cock-A-Doodle Doo’s chicken farm story) and sardonic (Jordan For President’s rally-meeting song that includes the verse “I’ll personally see to it that every living American gets his portion, after I get mine…”) and alternates sophistication (Azure-Te’s Nat King Cole emulation) with schmaltz (Only Yesterday’s ersatz Nat King Cole).

But mostly Jordan takes feisty care of the jumping blues business. The range of city or backwoods accents, vocal timing at breakneck speed and the gift of plugging a narrative in merely three minutes are notably present in the hard-swinging Louisville Lodge Meeting, one of Jordan’s finest successors to Saturday Night Fish Fry. Best of all is the macho blues How Blue Can You Get, a romp supported by orchestra that features emotionally charged vocals by Jordan and would be resurrected to much acclaim by B.B. King in the late 50s.

The second disc is largely dedicated to Jordan’s releases on Aladdin, Vik and Mercury and presents a lot of examples of Jordan’s fruitless attempt to crossover to the rock & roll audience. While the derivative sides of Aladdin are singles that would’ve fared better in the hands of Elvis (Oo-Wee), The Platters (Hurry Home) or Big Joe Turner (A Dollar Down), his work on Mercury is unadulterated Louis Jordan. Rock Doc is a brick through the wall and Jordan’s re-enactment of his former mega-hits Ain’t Nobody Here But Us Chickens and Choo Choo Ch-Boogie are Ferraris that threaten to jump over the boarding. By no means did the fact that they failed to create the fuzz of his period in the 40s diminish the excitement of Jordan’s hyperkinetic vignettes of Afro-American apple-pie life.

Discography
CD1: You Will Always Have A Friend; I Can’t Give You Anything But Love, Baby; If You’re So Smart How Come You Ain’t Rich; How Blue Can You Get; Three Handed Woman; Trust In Me; Cock-A-Doodle Doo; Bone Dry; No Sale; Louisville Lodge Meeting; Slow Down; Azure-Te (Paris Blues); Jordan For President; All Of Me; You’re Much Too Fat (And That’s That); A Man’s Best Friend Is Bed; It’s Better To Wait For Love; Hog Wash; Time Marches On; I Want You To Be My Baby; Fat Sam From Birmingham; Lollypop; Nobody Knows You When You’re Down And Out; Only Yesterday; Wake Up Jacob (71.46)
CD2: Locked Up; Come And Get It: Everything That’s Made Of Wood (Was Once A Tree); Dad Gum Yo’ Hide Boy; Whiskey Do Your Stuff; I’ll Die Happy; Oo-Wee!; Hurry Home; A Dollar Down; I Seen What’cha Done; Louie’s Blues; Put Some Money In The Pot Boy (Cause The Juice Is Running Low); Fat Back And Corn Liquor; Time Is A-Passin’; It’s Hard To Be Good Without You; Whatever Lola Wants; Bananas; Chicken Back; Rock ‘N’ Roll Call; Ain’t Nobody Here But Us Chickens; Choo Choo Ch-Boogie; Morning Light; Rock Doc; Fire; Ella Mae; I Found My Peace Of Mind; Sweet Hunk Of Junk (71.50)
Jordan (v, as) with various musicians including Aaron Izenhall (t); Lowell “Count” Hastings (ts); Budd Johnson (bar); Jimmy Cleveland (tb); Wild Bill Davis (p, org, arr); Chester Lane (p); Bill Jennings (g); Bob Bushnell, Thurber “Sam Guy” Jay (b); Johnny Kirkwood, Christopher Colombus (d). New York, Chicago and Los Angeles 1951-1958.
Acrobat ADDCD3353