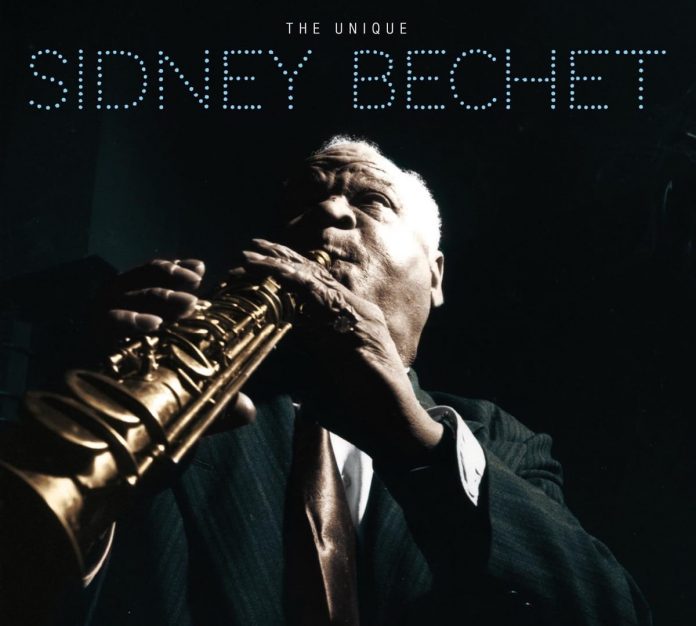 Bechet was already resident and immensely popular in France when he returned to New York to record these studio sessions for Blue Note in the early 50s. The dominating maestro of the soprano sax, Bechet was still at the top of his game , and is very strongly supported by experienced American sideman in these classic recordings. In the 1951 set , Sidney De Paris lays down a crisp, clean-cut lead, and Jimmy Archey’s jaunty, punching phrasing tucks in well in ensemble, throughout a lively, upbeat set. Back again in 1953, Bechet, with characteristic spirit and energy organised another set of driving up-beat performances. The experienced swing stylist Jonah Jones accompanies Bechet with a strong well-crafted lead, stretching out impressively in his solos; whilst Jimmy Archey continues to fit in with pep and skilled rapport.

The repertoire on both sessions consists entirely of familiar Dixieland standards, with simple head arrangements, and lusty free ensemble and solos the order of the day. Happily, the capable musicians involved deliver the goods with confident panache. A perceptible change in style between the two sessions is due to the changing rhythm sections. The more vintage sound of the 1951 set stems from Don Kirkpatrick’s Dixieland and stride piano, and veteran Pops Foster’s slapped bass. In 1953 Buddy Weeds’ lighter flowing swing style piano and Walter Page’s “walking bass” impart a smoother texture to the sound, whilst still swinging along nicely behind the forthright front horns.

Since the original 10-inch LP issues (Blue Note BLP 7020 and 7026) these recordings have been reissued several times. Completist collectors might prefer the 2001 Blue Note CD (30607), which added as bonus tracks five alternative takes (There’ll Be Some Changes Made, Blues My Naughty Sweetie Gives To Me, Ballin’ The Jack, Rose Of The Rio Grande and Black And Blue). Previously unissued, these had first appeared on The Complete Blue Note Recordings Of Sidney Bechet on Mosaic MR6-110 back in 1985. Instead, on this current reissue, Matchball have opted as bonus tracks for a selection of recordings which focus on some outstanding solo performances, including Blue Horizon (a superb example of  Bechet’s clarinet style), Summertime, (which helped relaunch his career) and Petite Fleur, a huge success in France in 1952.

All tracks confirm his status as a powerful figure from the earliest years of jazz, still blessed with extraordinary rhythmic drive, power, technique and melodic invention, which act like a tonic in lifting spirits. “Unique” is an entirely appropriate album title.