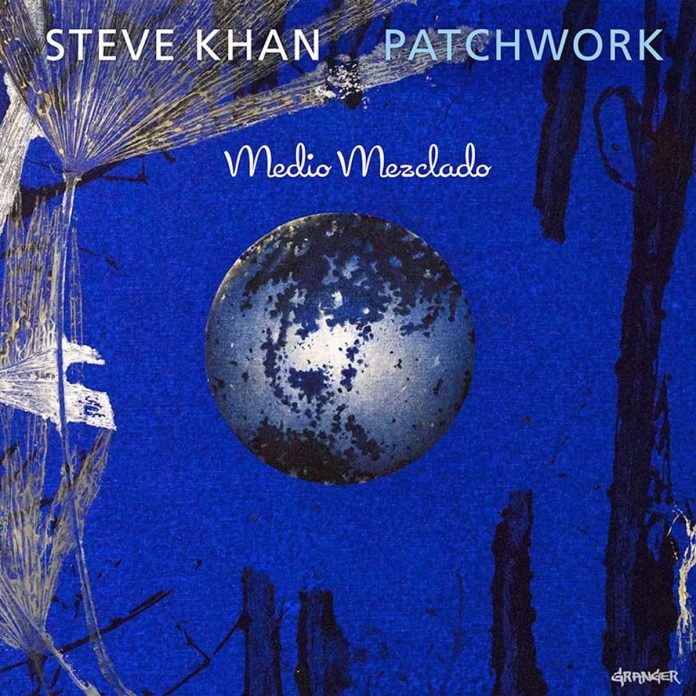 The basic style follows a lot of previous sessions by Khan’s trio, going back decades, but this is an especially convincing one. On the face of it it might seem smooth, bland, even superficial, and Khan still a bit of a pretender on the bebop front. But as it unfolds and one adapts to the dialect, a very impressive and engaging ingenuity emerges. By the way, there are extensive and illuminating notes on the album from Khan himself at http://www.stevekhan.com/discog27.htm

Epistrophy is a good enough start and Khan shows himself a very capable if not always bebop-fluent player. We become acclimatised to his sound – processed via judiciously applied delay, chorus perhaps, occasional pitch shifter and octaver. The ingenuity emerges on Ornette Coleman’s C. & D. – who would have imagined Ornette could sound so mellifluous and sophisticated? It’s a pacey son montuno reading that turns Coleman’s melody into 32-bar AABA structure with somewhat Monkish changes. There’s a solo from Mintzer (some tantalising games with the changes) and an excellent one from Khan, really on point and in his element, hitting more changes than on Epistrophy.

Bouquet is a gentle bolero with Khan on acoustic playing soulful, sliding lines like those he did on his solo albums on the Telecaster (here, when electric, it sounds almost entirely like the Gibson 335) or with Steely Dan. Naan Issue is a simple melody, nicely paced and framed for maximum effect using a subtle guitar synth or keyboard over a cool, downbeat, but penetrating cha-cha-cha. Khan has a considered and highly effective electric guitar solo making good use of chordal and solo melody lines. This uncluttered setting, with just bass and percussion, is perhaps his best.

A Shade Of Jade – the sidling, lightly abstract Joe Henderson tune – gets a fine arrangement, with Randy Brecker’s solo supported by Khan’s shimmering, volume-swelled chords. Khan solos with that soft yet attacking tone and a little bit of octaving on one or two phrases. It’s an example of lovely, lithe musicianship all round, a vibrant mixture of groove, tech and bebop in the best tradition. Behind its smooth façade it’s intelligent, stylish and deceptively visceral.

Too Late Now is a delicate Latin ballad in which the theme is transmuted through various key centres. Then another Ornette C tune – T & T – is turned into a convincing Latin fusion chart with explicit harmony, clear pulse and all.

The Journey Home starts as a very slow Lydian-flavoured ballad on acoustic guitar before exploding into a mid-tempo 4/4 groove with an electric solo and shifting mood again in a third section in 3/4. With its contrasting movements and length (15.36 minutes) it’s really a suite, and the closest thing here to Pat Metheny. Huracán Clare picks up the Brazilian vocal mood that ends Journey Home but turns into seven minutes of undenatured, uptempo samba with a theme that makes beguiling use of repetition.

And so ends an engaging, exhilarating and jam-packed hour and a bit of A+ music-making. Khan has aspired to be Wes Montgomery but on the basis of this album, probably the best he’s produced in years despite its stylistic familiarity, he can stay right where he is.

Steve Voce - 11 March 2021
When Parker took part in a five-hour benefit concert at Rockland, he'd been working with string accompaniment for a couple of years. It really was a daft idea, and...

Jazz Journal - 30 May 2020
New evidence of Mike Stern's move towards a lyrical sensibility comes with this third in a series of albums for Atlantic. Noted for his use of Jimi Hendrix sonorities...