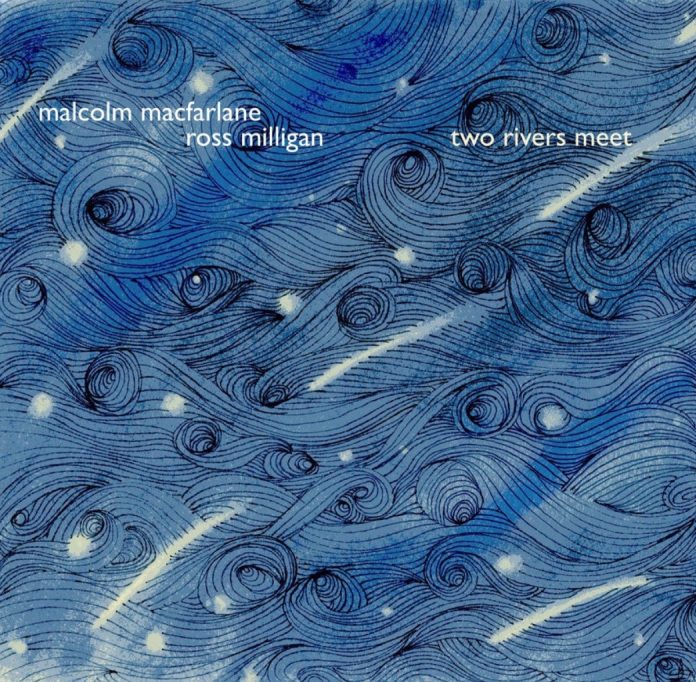 Scottish guitarists Malcom MacFarlane and Ross Milligan have created an oasis of serenity with their 10 new, mainly acoustic compositions. With the two of them composing half the tracks each, they can both be credited for their ability to sustain a subtle, textured and reflective ambience throughout an hour in which they transcend musical genre. Milligan works in a wide range of musical styles and genres, having recorded and toured extensively as well as having compositions appear in film and TV.

The first three tracks of Two Rivers Meet are soothing, reflective and almost mediative. MacFarlane and Milligan’s virtuosity and skill are boundless and they give a showcase of their technical abilities which does not fail to impress. The track Constellations alludes to a Mediterranean setting, evoking the location with a beautiful, melancholic melodic line that creates a peaceful atmosphere.

Where Two Rivers Meet introduces a new dynamic, an electric guitar taking the lead with a virtuosic, country and soulful sound against the supportive line of acoustic chords strummed beneath, interrupted by occasional spread chords which appear to almost light up.

MacFarlane and Milligan return to a peaceful and reflective style with Tunnels, except this time with a more sorrowful and nostalgic melody line. This prepares the listener for Tales Of Sorrow, a mournful track nonetheless full of contentment and gratitude. There’s clarity in the playing and a wide-ranging and exquisitely beautiful melody follows.

The serenity sustained throughout this album is astonishing. MacFarlane and Milligan play with a tenderness and sensitivity that heals the soul.

Nigel Jarrett - 30 December 2021
It might be silly self-fulfilling prophecy to describe an album by an Austrian big band as Teutonic (as the term is pejoratively applied), but there's a heft and almost...