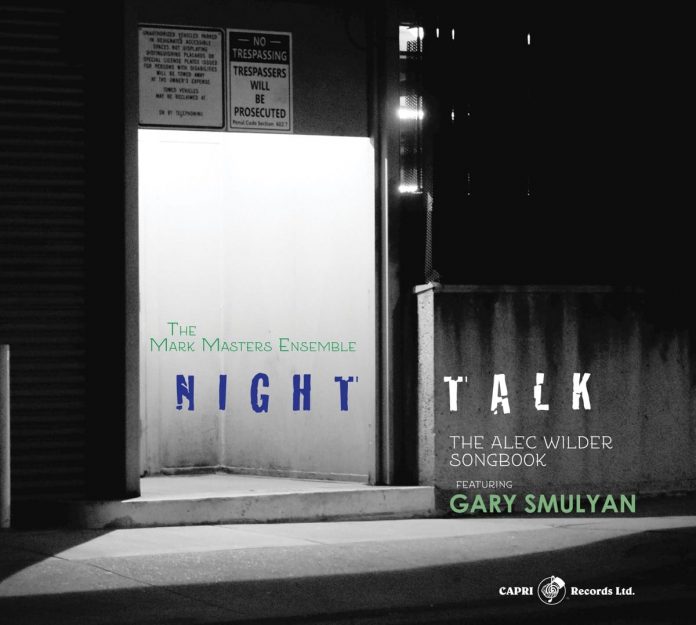 It’s been a while since I’ve reviewed recent jazz as straightahead as Night Talk – and very enjoyable it is too. A splendid album, in fact, with something of a West Coast flavour. The reviewer who describes it as “pleasant enough … if you like smooth late night jazz”, can’t have been listening.

This is the work of a great jazz arranger, who’s also a fine composer in his own right. Mark Masters, based in California since the 1960s, has brought together a compelling octet featuring Gary Smulyan, one of the leading contemporary baritone saxophonists. Another well-known member of the ensemble is bassist Putter Smith, who’s worked with Alan Broadbent among others.

Alec Wilder (1907-80) was author of the classic American Popular Song: the Great Innovators 1900-1950, and a composer of sophisticated show tunes interpreted by leading jazz players as well as popular vocalists such as Sinatra. This album, featuring nine of his compositions, shows that he richly deserves a tribute album. Mark Masters’s arrangements are tight and imaginative, with voicings and colour that’s a delight, and superb solos by band members.

Masters and Smulyan have worked together for over 20 years and clearly have a musical empathy. You’re Free opens with a long and thoughtful solo by Smulyan’s baritone sax, set against a punchy big-band sound. Wilder’s best-known composition is I’ll Be Around, and Masters offers a swinging arrangement of what is usually a ballad. Ellen is a plangent waltz, Moon And Sand is a beautiful mid-tempo performance in a loose Latin feel. Other compositions include Baggage Room Blues, recorded by Stan Getz and Chet Baker.

I described the album as “straightahead”, but Masters is not a musical conservative – for instance, he released a tribute to the music of Walter Becker and Donald Fagen that featured Oliver Lake and Sonny Simmons. When I asked by email how far he regarded himself as a jazz composer, he responded “With regard to Night Talk, it is correct that I consider these [as] arrangements … The Steely Dan project is more re-composition. In that instance, I stripped a significant amount of their material away and started over”. It’s a difficult question – was Gil Evans an arranger when he reinterpreted standard material? Not on The Birth Of The Cool, I’d argue. But however it’s categorised, Night Talk is an ambitious, sophisticated and immensely enjoyable release.

Peter Gamble - 07 September 2021
These duo recordings are available here for the first time, featuring two musicians who were taken from us at far to an early juncture in their lives. What makes...