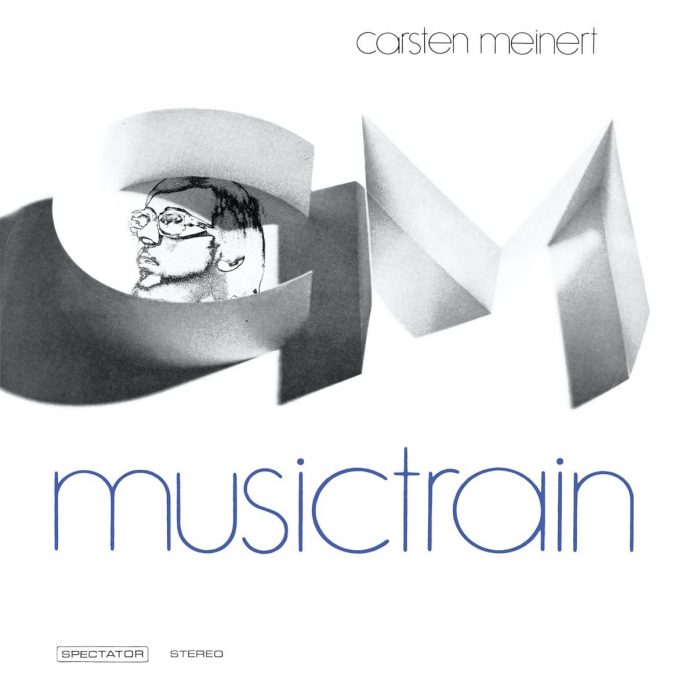 This extraordinary album from 1969 – which participant and sleeve-writer Ole Matthiessen rightly deems “ a spectacular Danish landmark recording session” – comes from the end of a decade which must have been one hell of a time to have been into jazz in Denmark, whether as player or listener.

Stan Getz and Oscar Pettiford had moved there at the end of the 1950s and in the 1960s, Dexter Gordon and Ben Webster, Kenny Drew and Duke Jordan, among others, followed suit; there was really special “local” talent such as Niels-Henning Ørsted Pedersen and John Tchicai, Pierre Dørge and Alex Riel, and a superb club in Copenhagen, the Jazzhus Montmartre. Early in the decade, avant-gardists Cecil Taylor, Albert Ayler and The New York Contemporary Five (with, a.o., Archie Shepp, Don Cherry and Tchicai) all recorded memorable albums in Copenhagen.

Headlined by Danish saxophonist Meinert (who wrote all the material) but very much a collective affair, Music Train clearly references and reflects various aspects of such earlier activity of the black American avant-garde. But it’s worth noting that Music Train comes at the end of a period when Danish jazz could lay claim to two classics of its own avant-garde ambition and achievement: the August 1967 Cadentia Nova Danica on Storyville with, a.o., Tchicai (as) and the July 1969 Afrodisiaca on MPS, from an enlarged Cadentia Nova Danica ensemble featuring Tchicai again with, a.o., Pierre Dørge (elg) – who appears here. So while the black American precedents to Music Train remain as clear as they are crucial, it’s also possible, at times, to infer a quest for “something else” in this music.

The Coltrane- and Ayler-fuelled intensity with which Meinert charts that quest is supported by strong playing all round, especially from the multi-layered rhythm section. As Matthiessen points out in his lucid and well-researched sleeve-essay, the music was cut just a few days after Miles Davis had recorded Bitches Brew. The opening, full-on and fiery San Sebastian has a passionate rawness to it which distinguishes it from a track like Spanish Key from Davis’s classic, even as, melodically and rhythmically, it prefigures aspects of Chick Corea’s Hispanic ventures of the 1970s – distinguishing itself, thereby, from the poetics of the American avant-garde alluded to above.

Free jazz in the Ayler vein inflects the eyes-upturned spiritual atmos of Before Sunrise, while the deliciously floated grooves and subsequent swing of This Time build on the modal approach which drove so much post-Coltrane jazz of the time. There’s a sense, once again, of a quest for “something else” in the rock-fuelled yet relaxed rhythms and funky, at times Booker T-like organ swirls of C.M. Music Train, while the 34 seconds of the concluding vocal and guitar spoof that is Valby By The Railroad Track should strike a chord with anyone who warms to the zaniness of Robert Crumb or Cheech and Chong.

Issued with fine remastered sound plus excellent extra takes and extensive photo documentation of the session, this is an important – key, even – historical document. To my ears, it mostly sounds as fresh and strong as it must have done the day it was cut.

Kenny Carr is a New York based guitarist who played with Ray Charles for 10 years. Departure is his sixth album as leader and...

Nearly a year ago the world lost one of its piano greats in McCoy Tyner. Now it has lost another who operated in the...

Meredith d’Ambrosio should be far better known. Pianist, singer, composer, lyricist, teacher, calligrapher and artist she is a true renaissance woman who was frequently...

This is the third edition of Ted Gioia's history of jazz – a living beast that in this incarnation has grown by 150 pages...

The results of its Fifth Annual Jazz Poll are presented along with other "entertainment for men" in the Feb­ruary issue of "Playboy". According to...

"Issued with fine remastered sound plus excellent extra takes and extensive photo documentation of the session, this is an important – key, even – historical document. To my ears, it mostly sounds as fresh and strong as it must have done the day it was cut"Michael TuckerCarsten Meinert: Music Train Revisited – The Remix & More
Advertisement