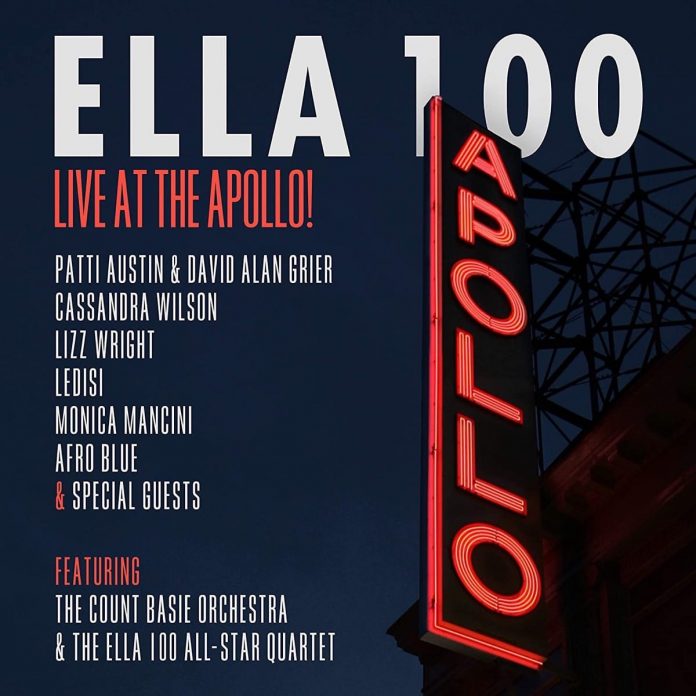 Ella Fitzgerald’s modesty and cunning as a teenager in 1934 helped her to opt for singing as a career. At Harlem’s Apollo Theatre she was queueing to perform a dance at its weekly amateur talent night. On stage before her were the Edwards Sisters, employing a more ironic coyness in a dance with discreetly moveable fans. It was no go for Ella; she decided to sing instead.

The song was an approximation of Hoagy Carmichael’s Judy as sung by Ella favourite Connie Boswell of the Boswell Sisters. The titillating Edwards Sisters were remembered by Gregg Field, the drummer who on leaving Basie replaced Bobby Durham in Ella’s trio from 1985. He produced the 100th birthday celebration for her preserved on this album.

It was held at the very same theatre and began with a simulated “radio broadcast” of Ella’s appearance. (How did radio work 82 years earlier for dance contestants? Tap, one assumes.) Field scripted the radio slot reconstruction for the centennial, and the Carmichael chart was delivered by Howard University singer Ayodele Owolabi.

It was a seamless, joyous evening, the Count Basie Band smoothed by the added strings of the Big Apple’s top freelancers. Co-hosts Patti Austin and David Alan Grier also gave their vocal all, splendidly so in I Loves You, Porgy and There’s A Boat Dat’s Leavin’ Soon For New York from Gershwin’s Porgy and Bess (Grier has been a notable Sportin’ Life in the opera). That was arranged by Field and others, including pianist Shelly Berg, who featured in an Ella-style quartet with the soulful Lizz Wright for Love You Madly and The Nearness Of You. There was, of course, plenty of scat-singing, the most cheer-leading example coming from Ledisi with the Basie boys in a Benny Carter arrangement of Honeysuckle Rose.

Modern band arrangements elsewhere included those by Patrick Williams for A-Tisket, A-Taskit (Austin), How High The Moon (Austin with the close-harmony group Afro Blue) and You’ll Have To Swing It Mr Paganini (Austin and Grier). The Nelson Riddle arrangement of Ain’t Misbehavin’ for Andra Day was written for Ella but never recorded by her, and Chick Webb’s for Austin on When I Get Low I Get High was recognition of Ella’s association with his band. Cassandra Wilson was mesmerising in Cry Me A River and Monica Mancini superbly soft-focused in her duet on Once In A While with guitarist Brian Nova. Owolabi joined her Afro Blue co-singers for Oh, Lady Be Good, and Basie trumpeter Scotty Barnhart stepped forward for a couple of solos.

There were no passengers in this impressive cast list. For a tribute to the best, only the best will do.

Stanley Crouch, a controversial, aggressive and influential jazz critic, columnist for the Daily News and The Village Voice (from which he was fired after...

Pianist-singer Wendy Kirkland is consolidating her status as a force in British jazz, especially in the sector populated by "piano divas", the title of...

Ellsworth “Shake” Keane is probably best known for his six years as front-line partner in the Joe Harriott Quintet that recorded the innovative albums...

The above is a collective person­nel and, in fact, there are solos from Rutherford and Coxhill and duets, with piano, for each of the...

Ella 100: Live At The Apollo"It was a seamless, joyous evening, the Count Basie Band smoothed by the added strings of the Big Apple's top freelancers"
Advertisement