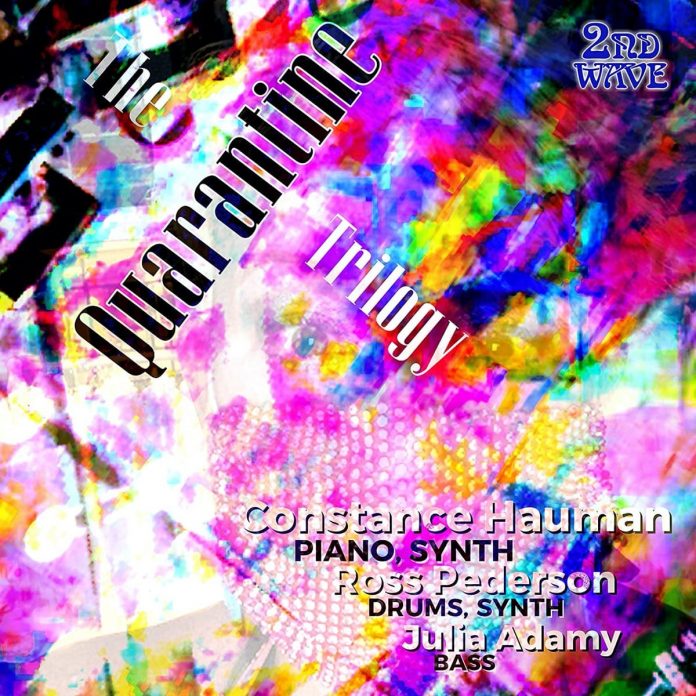 The Quarantine Trilogy features four tracks, three of which were written in March this year, and recorded on the eve of New York City’s lockdown due to the COVID-19 pandemic. This album expresses Constance Hauman’s personal experience of one of the most unsettling, dividing, yet communally experienced periods of our time.

Despite having two highly acclaimed solo vocal albums, Hauman simply plays the piano throughout these tracks. Panacea, Total Lockdown and Apollo were recorded as improvisation between Hauman and Pederson. With interruptions from social distancing regulations, The Quarantine Trilogy agreed to leave them untouched, except for the addition of cool, funk-like drums and bass onto the third track, Apollo. With these additions lacking in the first two tracks, it makes for a slightly jarring change; however, given the abrupt arrival of the pandemic this was perhaps their hoped-for the effect, in which case they have achieved it, no doubt. Contrastingly, Panacea and Total Lockdown are eerie, piano-orientated explorations which allow Hauman to showcase her sensitive approach to the music, as well as develop the improvisations alongside Pederson.

The fourth and final track of The Quarantine Trilogy is Spirit, an improvisation by Hauman and Pederson from January 2017, three days after Barak Obama’s farewell address. Since its arrival, this track has become a tribute to Obama’s legacy. Deciding not to include vocals or lyrics of her own, Hauman incorporates phrases from Obama’s speech. The result is an ethereal and mysterious track, one that Hauman felt important to include in this album “given the uncanny and unsettling timing of this catastrophic pandemic and with the virulent and divisive political climate of this election year”. Spirit matches the first two tracks more closely in terms of its temperament; however, it feels more artificial than the piano work of Hauman on Panacea and Total Lockdown.

Ultimately, The Quarantine Trilogy have embodied in 25 minutes the unsettling, uncanny and lonesome time that the world has grown to know in the past few months. They have produced a thought-provoking and current album for people of the present and the future.

Since their debut with Last Things, reviewed in my post of 18/09/19, Hauge and Young have toured to clubs and festivals in Japan, South...

“I’m not going to lie to you, I was devastated”, admits guitarist Nigel Price of the impact on him of the Covid-19 lockdown. “Absolutely...

Where some of his fellow fusioneers have ventured along more esoteric avenues, Bill Evans has kept faith with the central values of the genre....