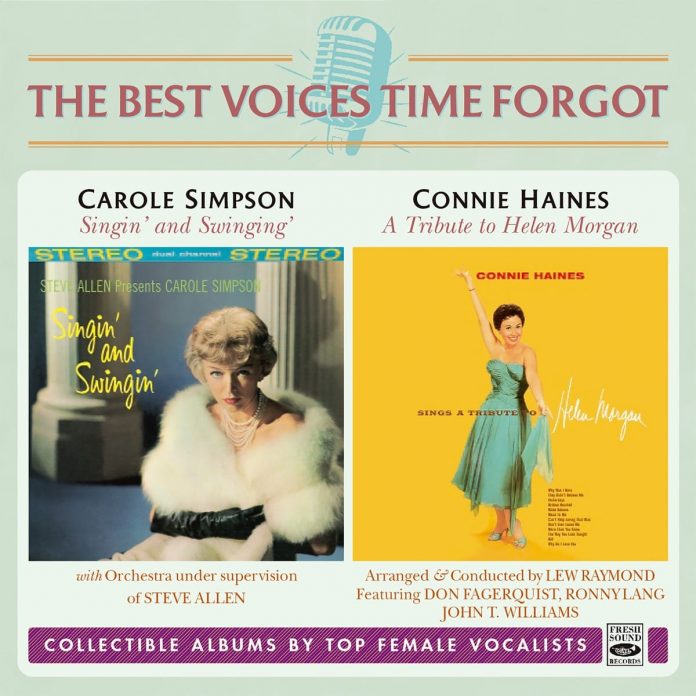 Carole Simpson, who died in 2012, had an intimate quality with a lyric that recalls Jeri Southern, Chris Connor and June Christy. Although she doesn’t play here she also had a reputation as a very fine pianist with an encyclopaedic knowledge of the songbook repertoire. She sang with the Billy May orchestra in 1950 which led to considerable club work as a single. She impressed Tutti Camarata who recommended her to Dave Cavanaugh at Capitol Records which led to her first album All About Carole in 1957 (Jap Toc J5984CD).

On this CD she performs a selection of Steve Allen originals but it has to be said that she deserved better material than this. The high points are This Could Be The Start Of Something Big, which was the theme song for Allen’s NBC talk show, and Oh What A Night For Love, which has been recorded by Ella Fitzgerald, Mel Tormé and Frances Wayne.

Connie Haines is quite different to the performers usually featured in The Best Voices Time Forgot, Jordi Pujol’s CD series about forgotten singers, because she was a well-known artist with a very impressive resumé. She worked extensively with Harry James, Tommy Dorsey (often together with Frank Sinatra, Jo Stafford and the Pied Pipers) and Tex Beneke.

Her 1957 Tribute To Helen Morgan could not have been better timed, because the following year Warner Brothers released The Helen Morgan Story starring Ann Blyth and Paul Newman. Her emotional interpretations of classic torch songs such as They Didn’t Believe Me, Yesterdays and Can’t Help Loving That Man are worthy of a Doris Day. Elsewhere she creates a gentle swing on Broken Hearted and Mean To Me that occasionally brings Kay Starr to mind. The album also benefits from some tasty Don Fagerquist on They Didn’t Believe Me, Broken Hearted and Mean To Me.

Described by Zimbabwean journalist Liam Brickhill as “a new star in the southern sky”, and by his legendary mentor, Bra Johnny Mekoa, as “the...

The conductor, composer, pianist and TV “personality” André Previn, died at the age of 89 at his home in Manhattan, 28 February 2019. Equally...

It's amazing how many jazz musicians were influenced by music in the home. For saxophonist Julian Siegel, touring his album Vista now, it was...

Matt Parker considers whether progressive British jazz of the 1960s had a political effect on society. Its small audience figures say probably not

Perhaps the most exciting performance of the day was that of guitarist Keith Rowe and drummer Eddie Prevost. Music of appalling originality, their set...