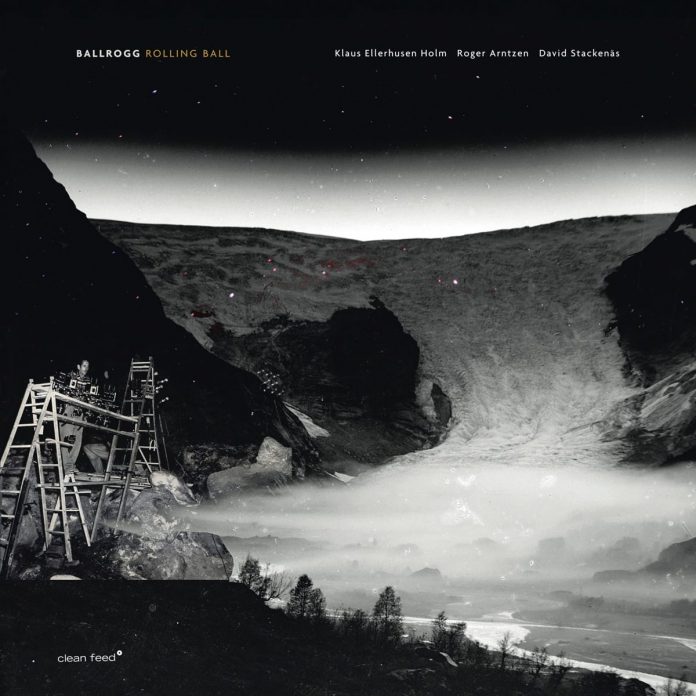 The creating, augmenting or emphasising of atmospheres has for me always been a nebulous musical notion, stretching as it does from what we feel when we’re sat in front of the cinema screen to when we’re ambling, perhaps aimlessly, through the increasingly scarce (and these days largely deserted) spaces that are shopping centres.

The paragraph above serves to indicate that I don’t quite know what to make of this album. On the one hand I can at times hear echoes of the Jimmy Giuffre, Paul Bley, Steve Swallow trio that I seem to recall namechecking a few months back, while at others, as on Merken, I can hear a tentativeness that could almost be contrived, as if striving for atmosphere resulted only in mutually agreed restraint, albeit with politeness kept at a welcome distance by a vague sense of unease.

That restraint works on different levels, however, and not all of them are negative. In avoiding virtuosic flights, the trio eschews a fair percentage of the tried and trusted. In its very lugubriousness the title track still manages to embrace a kind of unassuming, darkly comic anarchy, which isn’t a description that applies too often these days, although here it can be realistically applied twice because it’s just as true of Collage Casual, albeit for rather different reasons.

In short, and despite the tendency for creating atmosphere sometimes sounding as though the trio regard it as an end in itself, this (most unusually) is an album to come back to, not least because the music pulls off that not inconsiderable trick of revealing more of itself with repeated listening.

Steve Voce - 22 February 2021
In December 1948 Miles Davis handed in his notice to the Parker quintet, saying that he couldn't stand it any more. "Bird makes you feel about one foot high."...