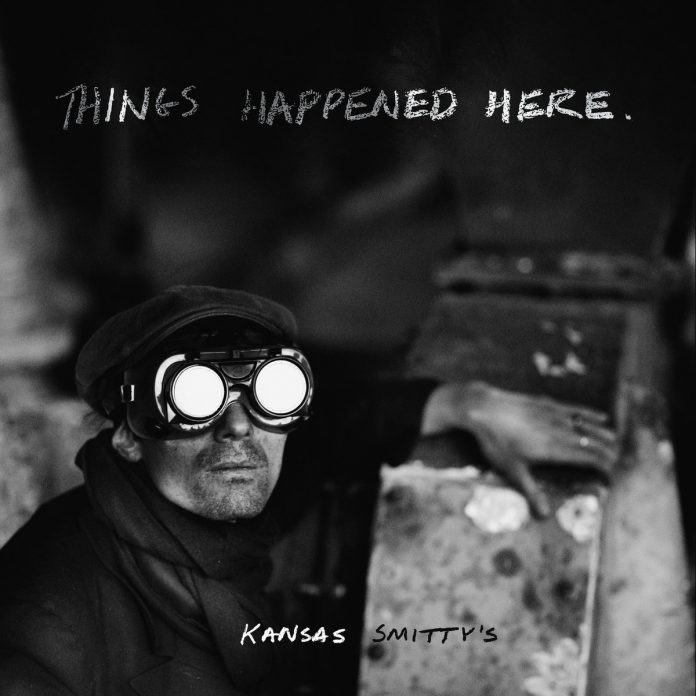 In a splendid example of cutting out the middle-man, this band had scarcely been born before it acquired its own venue. That’s how both a seven-piece band and a basement club in Hackney, east London, come to have the same name: Kansas Smitty’s.

When I first heard the band, about three years ago, its general style was a kind of latter-day swing, but likely to wander off into other territory if it seemed like a good idea at the time. Now, with its fourth album, things are still stylistically assorted, but a perhaps bit calmer.

All the numbers here are composed by leader and founder, Giacomo Smith (alto, clarinet, bass clarinet), and this is the way he hears them. Even so, it couldn’t be any other band than Kansas Smitty’s playing them.

According to Smith, there’s a common idea behind all nine pieces, that occasional feeling when one enters an old building that it has a memorable past, that “something happened here”. I can’t imagine how that can be expressed in music without a few prior hints, but there’s certainly an atmosphere to some of these to numbers.

You get it at once in the opening track, Riders, with the bass clarinet stalking around menacingly. Soloists all fit beautifully into the ensemble, rising out of it and gracefully merging with it again. Peter Horsfall (trumpet) and Alec Harper (tenor) play brilliantly on Temple Of Bel. The orchestration, with only three horns to deploy, is ingenious and effective. At other times it’s catchy riffs, go-for-it swing and the kind of easy togetherness that’s quite rare in jazz nowadays.

That may be where the basic charm of Kansas Smitty’s lies. It’s a real band, like bands used to be – rehearsing in back rooms of pubs, even when there was no immediate chance of a gig, just to do it. (In Kansas Smitty’s case, of course, they’ve got their own premises to themselves in the daytime.)

London used to be full of such bands, from trios like Major Surgery to big stuff like Mike Westbrook’s. That’s how unique styles come into being. They evolve. It very rarely happens with a temporary “project”, no matter how brilliant its individual members may be. Kansas Smitty’s sounds the way it does because the people in it are truly in it. I’ve played this album repeatedly, because it’s so congenial, unpretentiously sure of itself and, well, enjoyable.

Several things immediately strike the listener on first hearing The Journey. First, the eclectic mix of the tracks and their respective contributors reflect the...

Kenny Werner’s 2018 solo album The Space was a work of striking lyricism and improvisational inventiveness. The album’s title was of great significance for...

Louis Armstrong is a hero, the great founding genius of jazz. Not much to argue about there. But try seeking a simple explanation of...