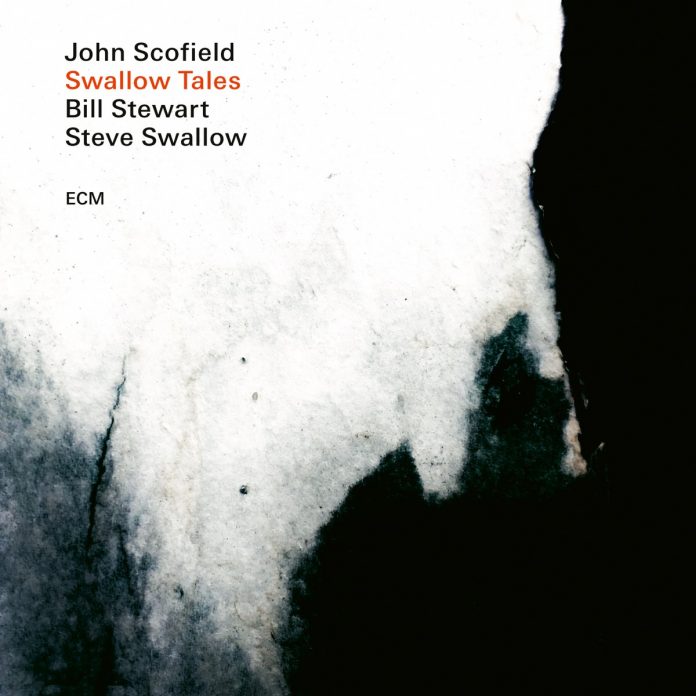 Scofield’s debut on ECM (he has appeared as sideman on the label, notably in Marc Johnson’s Bass Desires) may remind of the somewhat seminal (in being some of the earliest Scofield) sets on Enja of 1981. There Scofield appeared with Swallow and drummer Adam Nussbaum, producing mostly swinging, if low-key jazz reminiscent of Jim Hall, an influence Scofield had long acknowledged.

The sound on this set of Swallow tunes (perhaps partly an effect of the distancing that tends to characterise ECM production) remains relatively restrained but the music often swings openly in triplet style – not something often found on ECM issues, especially in latter days. There’s also, as ever in Scofield’s playing, and uncommon on ECM, strong blues accents, especially in the long codas, such as those to She Was Young and Eiderdown.

In the same passages Scofield also essays a kind of muscularity not typical of the label. That kind of playing illustrates what one earlier Scofield observer memorably referred to as Scofield’s tendency to “knock over the metaphorical beer bottle” and one that has well defined his style, in macro and micro terms – macro in essaying styles from chamber to stadium jazz-rock and micro on the bandstand, subverting harmony and idiom within pieces.

There isn’t however anything here that approaches the terrific bar-room brawl of Shinola, the title track of one of those Enja sets, which produces a delightfully ribald shock in a set that wouldn’t otherwise disturb the maiden aunt.

Swallow Tales doesn’t add anything new to the Scofield library (too much to expect given the guitarist’s epochal innovations of the 70s and 80s) and some may anyway prefer the more explicit player of the 1978 Enja Rough House with the torrential Hal Galper or the still new fusion of Still Warm. Still, it’s worth a spin – the key characteristics of Scofield’s voice aren’t quieted and the essence shines through the veiled sound.

Monty Alexander, Jason Rebello and more for Ronnie’s in April

Robben Ford & Bill Evans in ‘Blues, Miles and Beyond’ at Ronnie Scott’s

Cleveland Watkiss: ‘the face of innovation’

Russell Barnes collection to be auctioned in March

These nine tracks were recorded variously between 1965 and 1978. No full personnels are given but featured soloists are noted. Don Ellis built his...

Having named vibraphonist Joe Locke and his band's recording of Make Me Feel Like It's Raining (from Subtle Disguise) as my ubiquitous track of...

Michael Garber is a lecturer and researcher in theatre, film and media studies specialising in Tin Pan Alley and the American musical. Focusing on...

This record represents some­thing of a seduction job. It offers two of the most melodic of play­ers using their instruments to really 'take' the...

"Swallow Tales doesn't add anything new to the Scofield library (too much to expect given the major innovations of the 70s and 80s) ... Still, it's worth a spin - the key characteristics of Scofield's voice aren't quieted and the essence shines through the veiled sound"Mark GilbertJohn Scofield: Swallow Tales
Advertisement