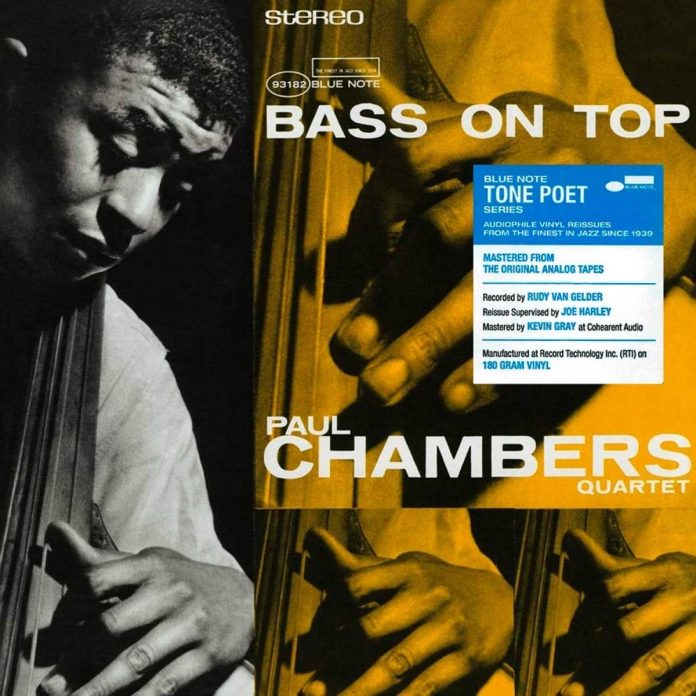 This was Chambers’ third leader date for Blue Note and arguably his best. The first, Whims Of Chambers, was a roaring hard-bop sextet featuring John Coltrane. Next came the Paul Chambers Quintet, with Elvin Jones at the drums. A critic reviewing this last suggested that it would be good to hear Chambers in a small-group context with just empathetic support from piano, and drums. Blue Note obliged with this session but added Burrell.

An impressive start is made with the opening Yesterdays, Chambers bowing his way through with a deep, dark, baroque sound seldom, if ever, heard in jazz previously. Burrell supplies bright, melodic support and Jones and Taylor are discreet and smoothly supportive.

You’d Be So Nice, and Chasin’ The Bird are slightly more conventional bop readings with emphasis on the bass solos, pizzicato and arco. Dear Old Stockholm is mainly Burrell, who takes the first and a shining closing solo with Paul mainly doing what most bass players do most frequently, supporting in the rhythm section. The Theme, well worn by Chambers in the Miles Davis band, has another vivid bowed solo. Confessin’ swings madly in conventional terms.

The notes suggest that nobody in jazz before has had such extended solo space as Chambers receives on this LP. Maybe 60 years on this has changed although I can’t think of a bass-led set that offers more solo space. Although it has been pointed out that his arco playing has been suspect on occasion, it is spot on here. Few would question his articulation, good taste and generation of swing throughout this programme.

Burrell, with his melodic phrasing, makes a good front-line partner and he moves seamlessly back to the rhythm section when needed. Jones’s melodic lyricism was just right too, and Taylor exercises good taste on all tracks. With their unusual (for them) elevation to the front line, Chambers and Burrell play with drive and, on medium and up pieces, a degree of aggression. So, Jones and Taylor keep it smooth and cool.

Another in Blue Note’s luxury Tone Poet series, it has a vinyl sound that’s exceptionally well mastered. The inside cover has photos of all the participants and the glossy front and backs are attractive. A note by producer Joe Harley about mic overload on Taylor’s ride cymbal, which was on the stereo master tape, shows just how much attention to detail has gone into this series. It also proves that even Rudy Van Gelder wasn’t perfect.

Jazz Journal - 26 April 2021
This is one of a series of taped interviews with musicians, who are asked to give a snap opinion on a set of records played to them. Although no...