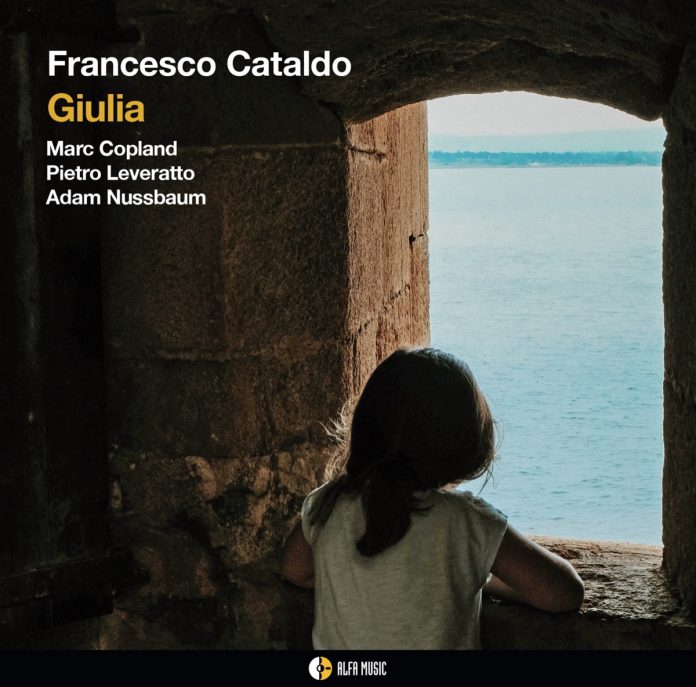 It seems that many live music venues are staring into the abyss and the availability of the live stuff in the era of the new normal looks likely to be far smaller than it was.

With this in mind I know from experience that “records” are coming back into their own, perhaps as a means of offsetting that lack of live music. All of which leads me to wonder how many of the “records” of contemporary jazz which are still flooding the market, relatively speaking, are likely to register with the listening public.

This album is a case in point. Undoubtedly the music is faultlessly executed by a quartet of consummate professionals, but as far as I can hear there’s next to nothing of the sound of surprise in it, and while the music might serve as balm for some troubled souls, if one isn’t troubled in an apposite way it can surely become so much aural wallpaper.

Cataldo plays acoustic guitar throughout, and for all of its undoubted qualities this is not an instrument of choice for anything unruly, unless of course a musician is intent on the memory-defying and resounding moment approach of Derek Bailey.

Cataldo, by way of some contrast, is a very correct player, and while the resulting good manners may be welcome in everyday life, musically the result is far more muted and curiously lacking in nuance. So Small So Big is a case in point, and could well serve as the group’s ECM audition piece.

I’ve found Copland’s pianistic skills compelling in the past, not least in his duo with Greg Osby, but here he hunkers down beneath the figurative duvet, and the impression of music that makes as few demands of the musicians as it does of the listener prevails.

Find out more about Francesco Cataldo: Giulia at francescocataldo.eu

Previous articleJohn Law’s Congregation: Configuration
Next articlePhoenician Blinds: The Sight, The Seer And The Seen

Paul is now one of the leading Chicago bassists, working with musicians including Ernest Dawkins and the Art Ensemble of Chicago – he appeared on...

The year that Notes From Underground was recorded, Berger played with Don Cherry – who from 1965 to 1985 made Sweden his home –...

This is a report of a seminar held at Indiana University in 1969 to explore the topic of Black Music. It documents talks by...

Francesco Cataldo: Giulia"Undoubtedly the music is faultlessly executed by a quartet of consummate professionals, but as far as I can hear there's next to nothing of the sound of surprise in it"
Advertisement