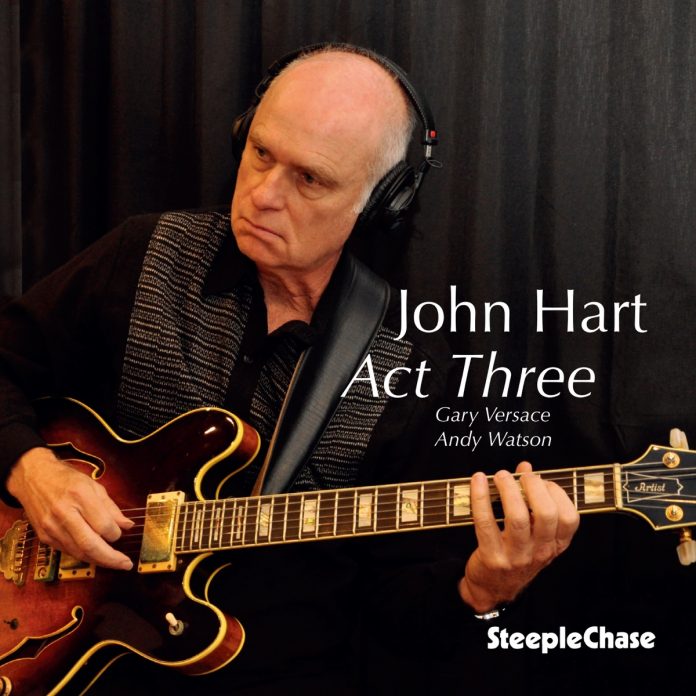 Since its inception in 1972, the SteepleChase label of the Dane Nils Winther has been synonymous with exceptional (often illustrious) mainstream jazz. The place of John Hart in its roster is none too surprising. Hart is a guitar player of refinement and taste, which is reflected succinctly on Act Three, his second dip into the organ combo format after 2011’s Comfort Zone.

Hart is more than comfortable with the format. Among other endeavours, he enjoyed an impressive stint of 16 years with the venerable and red-hot organ jazz legend Brother Jack McDuff.

Hart’s liaison with organist Gary Versace and drummer Andy Watson dates back to the 90s. Versace is a strong accompanist and an invigorating soloist, who furthermore coaxes sounds out of the Hammond B3 organ one hardly ever hears. Versace’s copious splattering of atmospheres contrasts nicely with Hart’s consistently crystalline and slightly buttered tone. Hart’s beautifully shaded melodies and detailed and balanced intermezzi of concise and fast cadenzas signify his matured musicianship.

Excepting the lithely swinging Poincana, the rootsy I Guess I’ll Hang Out My Tears To Dry and a routine version of Indian Summer, all compositions are written by Hart. His lyrical ease admirably leavens the alternation of keys of Act Three as well as the catchy uproar of Bad Penny. The progressive forays of Low Point Avenue and Heretics elevate Act Three beyond mere, if excellent, traditionalism. The attraction of Low Point Avenue lies in the tension between multi-noted clusters and the modalism of its dark, foreboding drone.

The off-kilter groove of Heretics inspires Hart’s mix of octaves and scintillating phrases. Hart resembles the speed walker that, following the stirring event of having suddenly caught the mugger of an old lady’s purse in a side-street pursuit, turned into a 100-metre sprint champion. Not on the strength of excessive muscle, but through a merely flexible and swinging gait.

Find out more about John Hart at people.miami.edu

Previous articleKathleen Grace with Larry Goldings: Tie Me To You
Next articleAndre Canniere: Ghost Days

Its detractors will describe all jazz as “light music”, refusing to distinguish light from serious as so-called classical music does. Fats Waller, Slim Gaillard,...

It is said that to copy from one person is plagiarism. To copy from two is research. I have consulted Dan Morgenstern and Jim Burns,...

By 1967, and with a great deal of playing experience to his credit, Clark turned 21 and moved to Oakland. Adding to his already...

For some years there have been tales of the Richmond music scene and Eel Pie Island, in the Thames off Twickenham, but nobody has...

This is a beautiful record. For their third Fontana collaboration, Davis and Evans have used as a basis various pieces of Spanish music. "Concierto...