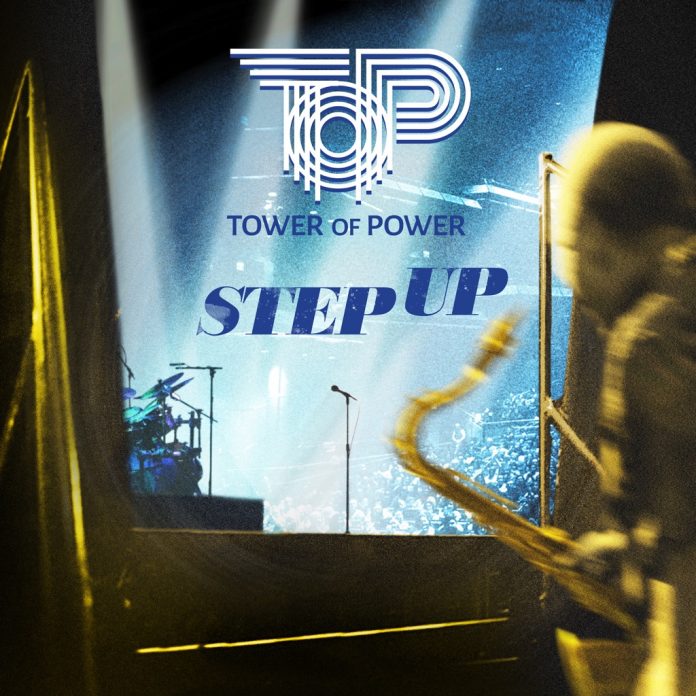 “East Bay Grease”: there’s a genre name that has it all – locally specific, blue collar and funky. It borrows from the title of the first Tower Of Power album in 1970, but was soon applied to bands like Blood, Sweat & Tears, Chicago and the now rather neglected Cold Blood. ToP had emerged a couple of years later as The Motowns, but with the addition of Doc Kupka on baritone the group acquired a deep, twin-carb sound that meant you practically had to have Teamsters membership to buy a copy. In contrast to Philly and Detroit soul-funk, the Oakland sound was a curious mix of sunlit hippy drop-out and sweaty outdoor work. Los Angeles had the Watts Towers, San Francisco had the Tower of Power.

There’ve been about 60 members in all during the band’s long history and I make this the group’s 20th album, leaving aside the live discs and best-ofs. The songwriting nucleus is still founder Emilio Castillo with Kupka, but there’s a least a dozen other hands in the credits to Step Up. The set’s bracketed with a defiant shout-out to the East Bay and nothing has been lost in energy since the glory days of Urban Renewal, In The Slot and Ain’t No Stoppin’ Us Now (1975-6). The last of these came out in a quad version (reissued by Dutton Vocalion a few years back) that is frankly ridiculous, mucus-clearingly loud and intense. The band’s personal histories have been somewhat chequered, most notoriously former lead singer Rick Stevens’ incarceration for first-degree murder.

These days vocals are shared around. Castillo takes the lead on the fine Look In My Eyes and Any Excuse Will Do, the latter a co-composition credit for sometime member Lenny Pickett, who should be known to jazz fans. Never really a guitar band, ToP have always had good rhythm players and Jerry Cortez keeps the middle moving and busy on a variety of guitars (baritone, steel, 12-string and other). Roger Smith’s Hammond does much of the heavy lifting and the horns do what TOP horns do best, blaring like klaxons at a truck rally.

Is Step Up a classic? No, some way short, but it is a confident assertion of the old East Bay way and fans and true believers will love it. Oaktown all the way!

Barry Witherden - 22 August 2021
The name might lead you to envisage a late-60s Californian psychedelic-rock band, but you’d be mercifully mistaken. The music is rooted in the culture of the Mahgreb, particularly Morocco. The...