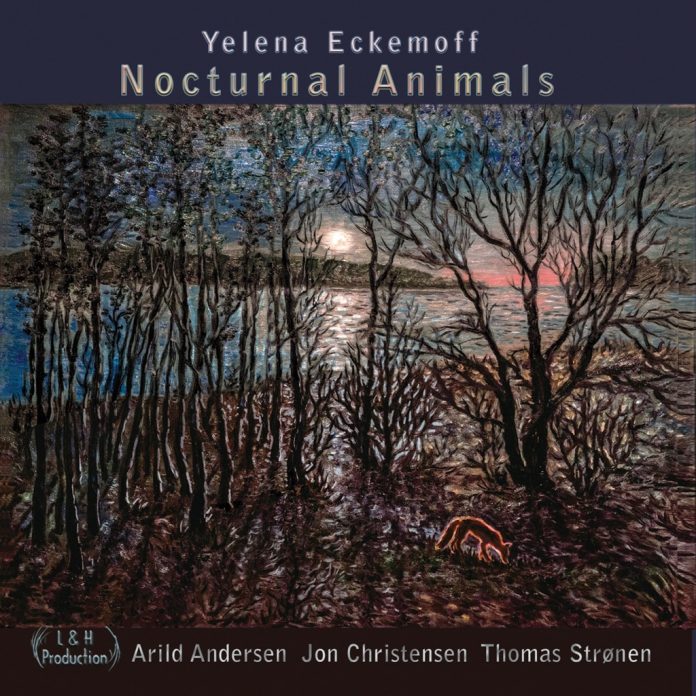 In his 20/01/19 review of Eckemoff’s Better Than Gold And Silver – a post which to date has received over 6,500 hits – Fred Grand wryly characterised Eckemoff’s music as among the finest never recorded by Manfred Eicher. While at times a touch reminiscent of Paul Bley, Eckemoff is very much her own musician. Her lyrical touch and very particular approach to what one might call the “weight” of phrasing, dynamics and rhythm are set in service of compositions which precipitate an unerringly characterful blend of poetically wrought beauty and a distilled yet expansive improvisational verve.

I first heard this classically trained, Russian-born but American-domiciled polymath (a captivating painter and touching poet as well as top-order pianist) on her 2013 Glass Song with Andersen and Peter Erskine (d). Impressed, I have since come to relish a good many of Eckemoff’s releases on her L & H label, including the surpassing Everblue of 2015 with Tore Brunborg (ts), Andersen and Christensen.

Eckemoff favours a productive combination of consistency and diversity in her personnel, often drawing upon Nordic players but also recording with the likes of Erskine, Billy Hart and Manu Katché. Here, Andersen and Christensen from Everblue feature, while Brunborg’s place is taken by Norwegian drummer Strønen, making for both a fascinating line-up and an outstanding two-CD set.

This was to be Christensen’s final recording session and it stands as a lasting testament to his space-conscious, cymbal-shimmering and bar-slipping magic. The excellent, ever-alert Strønen is also to be applauded. Hear, for example, the sparely wrought musings he and Christensen conjure at the end of Wolf, or the richness of their interplay on both Fox and what Andersen (pizzicato on both CDs and in typically resonant and compelling form throughout) has described to me as the craziest 5/4 piece he can recall playing: the funkily offset, richly turned and twisting Lynx.

There’s much rubato inwardness here, as in the mellow Cicada, Toad, Firefly, Owl and the opening atemporal figures of Wolf. But there are also extensive passages of joyous, forthright albeit freshly turned and textured swing, exemplified by the development of Hedgehog and the medium-up Fox, with Andersen’s delicious walking figures on the latter underpinning Eckemoff ‘s chordal incisiveness and deft linear flights. All in all, a splendid, unmissable example of a most distinctive artist’s ever-thoughtful, ever-lively and – above all – soulful world.

Nocturnal Animals is available from Amazon (CD), Proper Music UK, Apple Music, or Spotify. Find out about Yelena Eckemoff’s other projects on her website