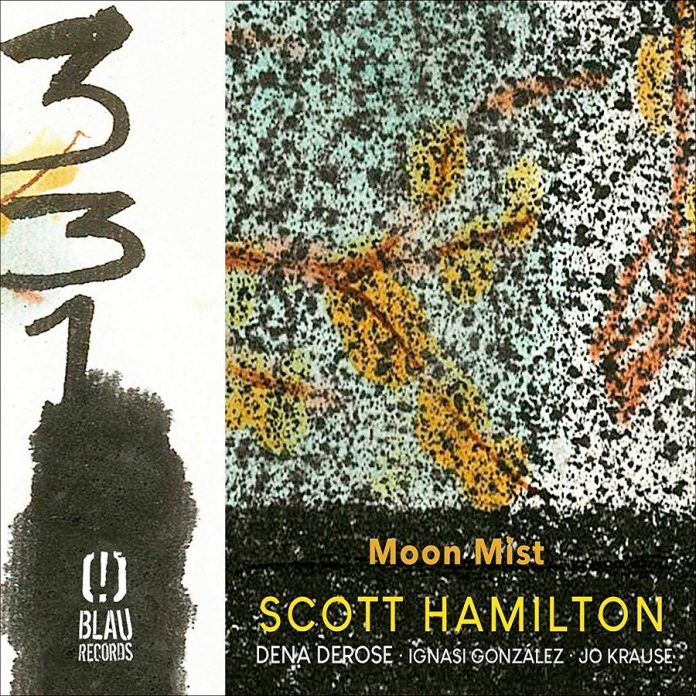 Whatever company he keeps and wherever he plays, Scott Hamilton continues to delight his listeners. This album, recorded in Spain, simply verifies that assertion. Accompanied by the talented singer and pianist Dena DeRose, native Catalonian bassist González and German-born drummer Jo Krause, Scott turns in nine immaculate and varied performances.

The group had earlier performed at Benicassim in Spain, and released two CDs: La Rosita and The Shadow Of Your Smile, and had long been a mutual admiration society. DeRose has said:”What I like most about Scott’s playing is his big beautiful sound, his laid-back style and the way he shapes his solos with such a feeling of ease and direction. He also chooses great tunes”. Returning the compliment, Scott asserts: ”I love Dena De Rose’s playing. She is a very distinctive and swinging band pianist who is also a bandleader and a very good singer. She knows what makes a performance hold together”. He has also acknowledged his respect (and affection) for long-time accompanists González and Krause.

Because of constraints on studio time, with one exception this album consists of improvised versions of standards. I’ll Close My Eyes, Moon Mist and Young And Foolish are taken at appropriately slow tempos, with Scott and confrères in perfect accord. His own composition, Castellon After Dark, is a gutsy but also gentle tour de force, with empathetic contributions from DeRose. Another highlight is a semi-bossa nova performance of the Astrud Gilberto/Stan Getz hit Only Trust Your Heart. The longest track, If I Should Lose You, has Hamilton and DeRose trading phrases with a reverberating solo from González. A straightahead and infectiously lilting rendition of Days Of Wine And Roses has commanding solos from Scott and Dena. Embraceable You receives a full-voiced and sumptuous reading from Scott, with Dena again displaying her pianistic credentials, underpinned by González and featuring a short solo from Krause.

Unsurprisingly, the leader expressed his satisfaction with the session – “I like the way that all of the tracks hang together” – while DeRose commented: “I enjoyed every tune, each time we play and record, there is a more cohesive sound to the band.” Listen and agree.

Ian Lomax - 09 March 2019
A  “jawn” is apparently Philadelphia street slang for “thing” – in the sense of “doing your own thing”. For McBride “doing his own thing” means playing music...

Michael Tucker - 06 December 2019
Many regions and cultural contexts have nourished the imagination of Manfred Eicher. He has long been fascinated by what one might call an “in-between” or nodal play...

Jazz Journal - 27 September 2019
Before sitting down to write this re­view I have been playing this record for the sixth time - and it moves me more each time I hear...

Mark Youll - 28 February 2020
Fans of Miles Davis may remember some grainy old footage of the trumpeter shadowboxing in a gym sometime during the mid-1960s. It’s a clip that in previous...