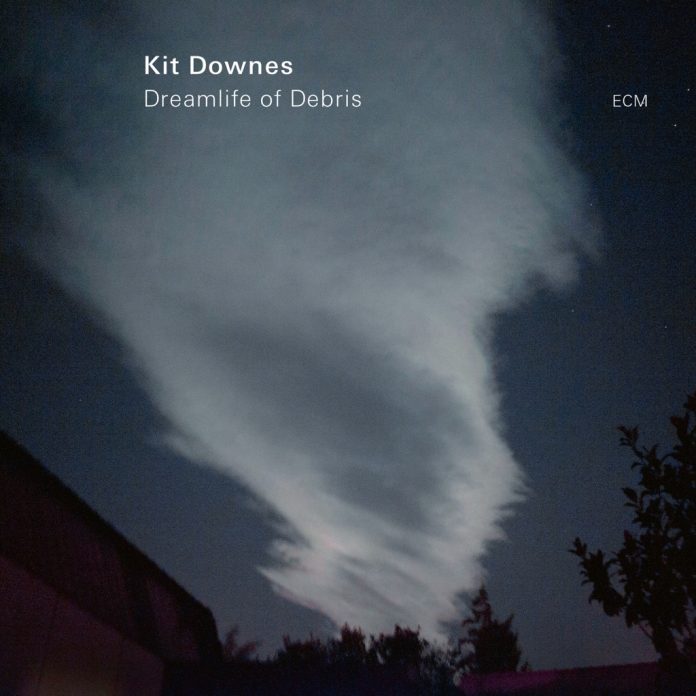 The title and eight tracks on this new disc from Kit Downes (his second for the ECM label) were inspired by a phrase the pianist discovered in director Grant Gee’s documentary Patience (After Sebald), a film which chronicles the engaging walk through Suffolk the German novelist and poet W.G. Sebald undertook that lead to him to writing his 1995 opus, Rings Of Saturn.

The record is also a continuation of sorts of a Downes-composed piece also prompted by Sebald’s writing titled Rings Of Saturn for his 2015 album Obsidian. But whereas Obsidian was mostly written and orchestrated around solo organ, Dreamlife Of Debris is coloured, albeit darkly, with piano, cello, guitar, drums and the seductive saxophone playing of long-term collaborator, Tom Challenger.

Recorded in the winter of 2018 between two spacious old churches in Snape and Huddersfield, the set has Downes and his group musically mirroring the grey, stormy sleeve shot and sets Sebald’s journey to a seductive ghostly soundtrack with an airy, dream-like ambience throughout. The opening bars of Sculptor fade in with Challenger’s tenor, breathy over sprightly piano runs and a single-note organ drone. Humming under motifs or solos, it’s the organ that primarily sets the mood of the record, whether cold against Railton’s haunting cello during Pinwheel, or stark, dark and unaccompanied through a more sparse-sounding M7, written by Melt Yourself Down bassist Ruth Goller.

Captured during the final recording session for the album, Bodes is the eeriest offering here. On a scratchy bed of piano, howling tenor and some uneasy, eruptive phrasing from Norwegian guitarist Stian Westerhus, it slowly unfolds itself as one of the disc’s highlights. More moving though is the brilliant Blackeye. Co-composed by Challenger, it’s a piece, akin to Twin, born out of an earlier idea and is rearranged here to feature drummer Seb Rochford who, after an extended silence, enters midway, powerfully lifting the intensity of Downes’ organ with odd-metered rolls on tom toms, light cymbals and a gong.

Hugh Rainey - 20 October 2021
Born in New Orleans in 1900, Nicholas was one of the classically trained, accomplished Creole clarinettists in early jazz, ranking alongside Noone, Simeon, Bigard and Bechet in tone, style, technique and...