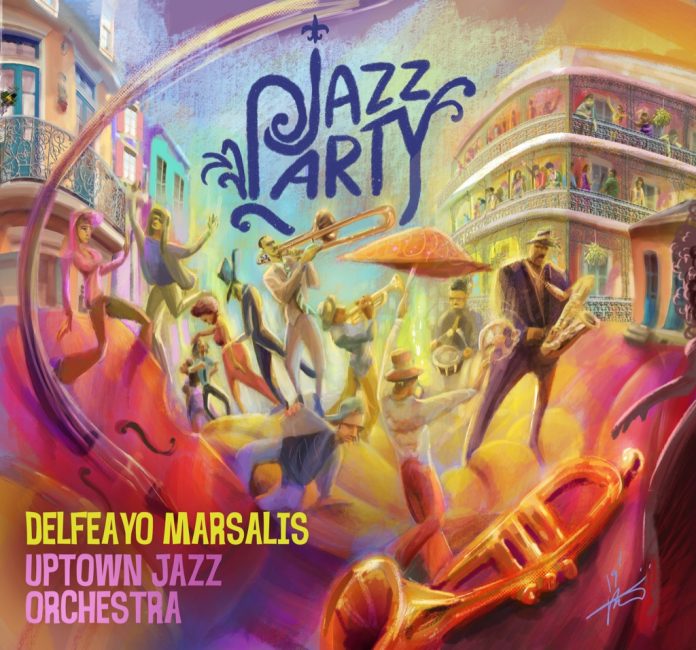 In an attempt to “capture the uniqueness” of the Uptown Jazz Orchestra and commit to disc the kind of energy that blew from the bandstand week after week during the band’s near 10-year residency at the Snug Harbour club in New Orleans, leader and trombonist Delfeayo Marsalis has delivered his most dynamic album in Jazz Party.

It’s a record naturally New Orleans in flavour and features modern twists from the New Orleans songbook alongside seven originals. The revelry begins with the slow, bluesy title track, slick with unison horns and a solo from Marsalis as gospel-licked as vocalist Tonya Boyd-Cannon, the soulful, scat-happy semi-finalist from NBC’s The Voice featured here.

Blackbird Special is more urgent and officially opens the party. The tune also spotlights original Dirty Dozen Brass Band saxophonist Roger Lewis whose brash, rhythmic baritone cuts through horns, bells, tambourines, whistles and second-line drums just as easily as the track’s references to soul and James Brown do. Elsewhere, the brilliant 7th Ward Boogaloo is a sassier affair. The title is a nod to the Creole district in New Orleans once described as home by the likes of Lee Dorsey, Jelly Roll Morton and Sidney Bechet, and the music, dancing between swing Latin and rumba, lends itself to the trad-band style associated with the latter.

It’s of interest to learn from the album’s liner notes that the Raid on the Mingus House was inspired not by the distinguished bassist tagged in the title, but “aspects of the current social climate in America”. This may go to explain the increasing tension rising in the rhythm section, the stacked horn lines building from a blare to a scream, and a trombone and sax blowing what sounds curiously like the 60s theme to Spider-Man through the intro.

Tailing an arrangement hell-bent on packing as many melodic ideas as possible into one track, a decidedly more light-hearted tune is Mboya’s Midnight Cocktail, a cool serving of swing and humorous bar banter from vocalist Karen Livers. The track later closes the set instrumentally but provides a little fun here before a fitting tribute to the late, great trumpeter Roy Hargrove (Dr. Hargroove) brings forth some deep funk.

Indeed, the album ventures into many avenues musically. An uplifting rendition of the Soul Rebels’ Let Your Mind Be Free flitters with 50s do-wop and the cultural connection between the Caribbean and New Orleans is clearly evident through a punchy Caribbean Second Line. There’s even an appearance from the great honourable educator, author, trumpeter and activist Dr. Brice Miller hiply rapping over So New Orleans, a track that just about sums up the overall vibe of this disc, the orchestra’s uniqueness and just how well Marsalis and his men can throw a party whenever the mood takes them.

Delfeayo Marsalis & The Uptown Jazz Orchestra: Jazz Party can be heard on Spotify and bought from Amazon

Nigel Jarrett - 10 June 2022
It's always interesting to listen to singers reportedly with jazz antecedents if only to estimate what they would sound like at full throttle. Marsha Bartenetti's interpretation of songs by...