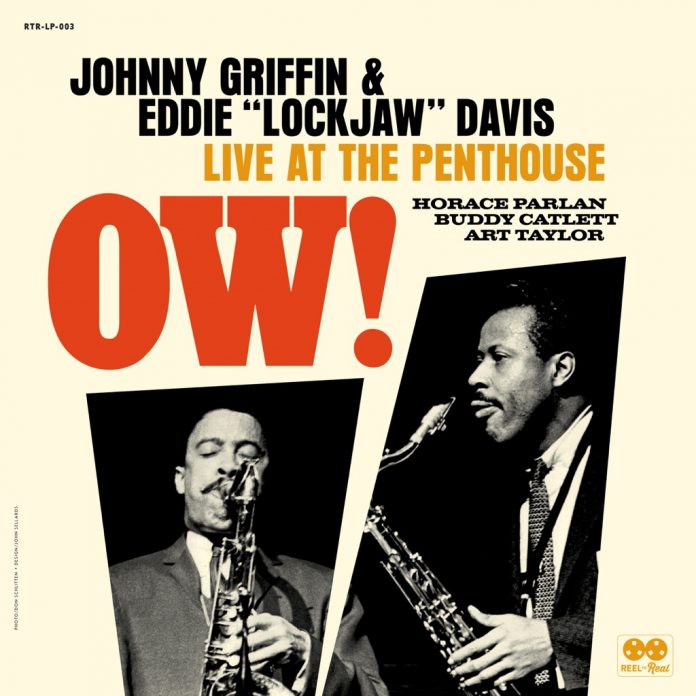 A previously unreleased 1962 recording at Seattle’s Penthouse Club for a radio broadcast, this has the Little Giant and Jaws in the compatible company of Horace Parlan, Buddy Catlett and Art Taylor. If their choice of tunes was already familiar, they are nevertheless treated to righteous wailing, often at warp speed. As I said in a review of the Avid compilation, Johnny Griffin & Eddie “Lockjaw” Davis: Four Classic Albums (JJ January 2019), although their duets eventually became formulaic, they rarely failed to excite and ignite.

Here the solo honours are fairly equal, but Jaws has the slight edge. On most numbers he is the first off the blocks, while Griffin offers a plethora of quotes, particularly in Ow! and elsewhere sprays notes like bullets. Yet against the seeming odds, the two principals always manage to finish in unison and in time. The rhythm section of Parlan, Catlett and Taylor provide unobtrusive but, when suitable, propulsive support. The most engaging tracks are Bahia and the ballad How Am I To Know?

A highly informative and well-illustrated 27-page booklet with essays by Ted Panken, producers Zev Feldman and Cory Weeds, MC Jim Wilkie, Charlie Puzzo, Jr., Michael Weiss and James Carter place this engagement and the Griffin/Jaws musical relationship in context. Panken relates that Henry Threadgill thought Davis was “the most original saxophone player I ever heard … the notes don’t come out of the saxophone the way they do when other people play – it’s not linear, it’s a convoluted style”. Art Taylor is also quoted as saying “you could hear Griff in Brooklyn when he was playing in Manhattan”. But at The Penthouse, Griffin’s graceful and sensitive solo rendition of Sophisticated Lady reveals his more reflective side. Understandably and happily, on Tickle Toe the two tenors pull out all the stops in solo and unison passages – with an assertive Taylor stoking the fires.

Jaws once told Stanley Dance: “There were Gene Ammons and Sonny Stitt, Wardell Gray and Dexter Gordon, but I don’t believe any two-tenor unit stayed together so long and travelled the country as much as Johnny Griffin and I did”. This attractive set, rescued from the vaults and issued with the permissions of the Griffin and Davis estates, is dedicated to the memories of the five stellar performers. It deserves to be heard.

Johnny Griffin & Eddie “Lockjaw” Davis: Ow! Live At The Penthouse can be bought from Wienerworld or Amazon

Gordon Jack - 21 January 2019
Along with Charles Mingus, Thelonious Monk and Horace Silver, the prolific Benny Golson created some of the most memorable compositions in the jazz repertoire. This reissue features his first albums...