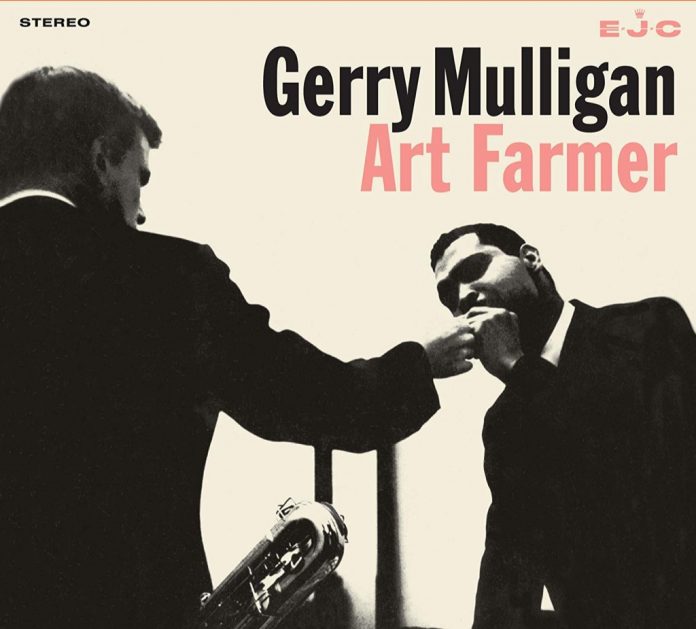 Art Farmer’s initial reaction to working with Gerry Mulligan’s pianoless quartet was, “It’s like walking down the street with no clothes on”. A quite understandable reaction from an instrumentalist used to working with pianists like Horace Silver, Hank Jones and Bill Evans. He quickly found a voice though in the rich tapestry provided by Mulligan’s sympathetic baritone, Bill Crow’s dancing bass lines and Dave Bailey’s crisp stick and brush work. The leader was one of the greatest arrangers of his generation and in the contrapuntal give-and-take of the ensembles he was able to find a perfect accompanying line creating a form and structure on even the most spontaneous of performances.

The first eight titles are from the group’s very well-received debut album What Is There To Say?, featuring probably the finest of all Mulligan’s quartets. It introduced new material like Just In Time, News From Blueport, Festive Minor, As Catch Can and Blueport which remained in the book for several years. They revisit My Funny Valentine which Mulligan and Chet Baker had put on the map in 1952. It benefits here from an intense reading from Farmer and the group’s theme song Utter Chaos is given another outing. It actually has a 32-bar structure but the leader chooses to omit the second A section as though impatient to get to the blowing choruses.

Essential Jazz Classics has included the quartet’s Hollywood radio broadcast titled The Navy Swings together with two titles from the Subterraneans film. It should be pointed out that Gerry’s solo on Things Are Looking Down became the basis for his original The Subterrannean Blues which he often performed in the 60s with Bob Brookmeyer at the piano.

Simon Adams - 10 March 2019
In this quietly intense trio, plus guests, bassist Martin Nevin stands out for his stalwart and always interesting contributions, whether delivering vital pizzicato interruptions or just when he is...