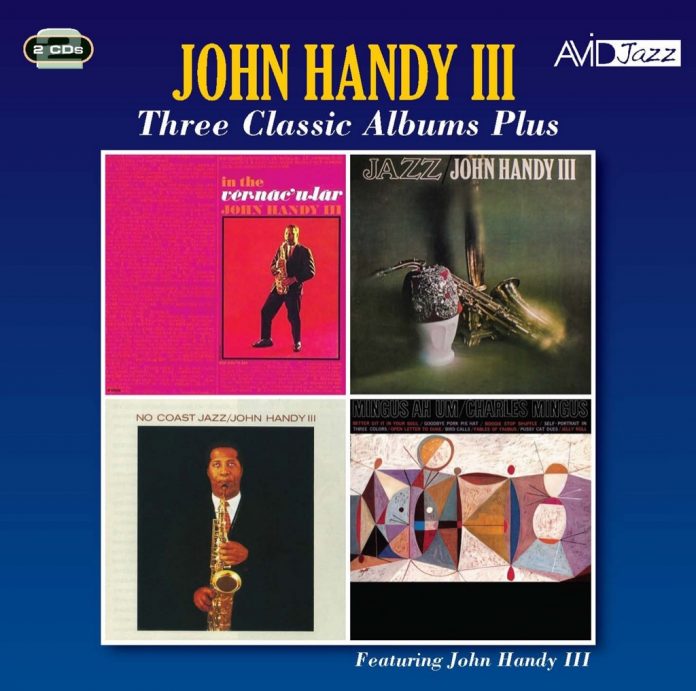 Not to be confused with the older “Captain” John Handy, the Texan was a gifted multi-instrumentalist who saw service with Mingus (Ah Um is included here as a quite unnecessary makeweight, and mistitled) and Randy Weston, who gets a nod on No Coast Jazz. I once tried to describe him as a hybrid of Charlie Parker, Eric Dolphy and Louis Jordan, and it’s somewhat reassuring – following the guffaws that got from a colleague – to find that Jordan’s name is mentioned in the reproduced sleeve note to Jazz, the latest of these three original LPs, which in the now familiar manner of such collections are presented out of chronological order.

The title of the earliest disc, In The Vernacular, pretty much captures what Handy was about. No Coast Jazz is a pretty good description. He’s neither hot New York nor California cool, though he inhabited both. Much like fellow Texan Ornette Coleman or the AACM crowd in Chicago, he wants to find the future already inscribed in the past, and complexity in the seeming simplicities of everyday music. His approach to the blues is direct but also unusual, not quite working off the changes, but doing more than reworking the melody, too. A scattering of standards performances suggest his lack of interest in long, exploratory improvisation in favour of terser, more direct statements.

He seems to have decided to limit himself to alto for his own recordings, which is curious given his facility on other horns (he plays tenor and clarinet for Mingus, who admittedly had Booker Ervin and Shafi Hadi already on his books). He has a strong band for the first album, with Roland Hanna holding the centre in his inimitable way, but the other groups are somewhat anonymous and the impression left by these albums is of Handy out on his own, with only token support from the others.

In a crowded category, Handy was never going to be a big star, but he had something unique, a voice and a musical presence that just about comes across on these records.

Fred Grand - 13 January 2022
Stories of triumph from adversity are some of the most timeless and appealing we know, a plot device loved and repeated by filmmakers and novelists alike. When Toronto-born guitarist...