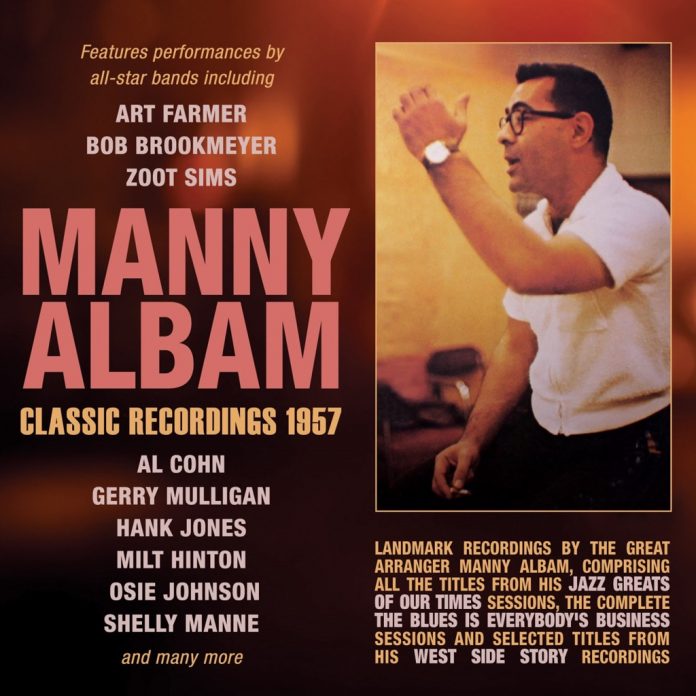 Now a largely and unfairly neglected figure by the jazz fraternity, Manny Albam (1922-2001) was born at sea when his parents were en route from Lithuania to New York. His first jazz enthusiasm was Bix Beiderbecke, but a young Manny selected the baritone sax as his instrument. He subsequently played with Muggsy Spanier, Charlie Barnet, Georgie Auld and Boyd Raeburn before becoming a composer and arranger who had his greatest successes in the 1950s and 60s.

This 25-track compilation includes the albums Jazz Greats Of Our Time, Vols. 1 & 2, which included Art Farmer, Bob Brookmeyer, Al Cohn, Zoot Sims, Gerry Mulligan, Hank Jones, Milt Hinton and Osie Johnson setting down an entirely satisfactory programme of originals and standards. The Blues Is Everybody’s Business (a four-part suite) was his most ambitious project, while his re-scoring of West Side Story so impressed co-composer Leonard Bernstein that he invited Manny to write for the New York Philharmonic anytime he had the inclination. He never took up the offer (but began to study classical music) and instead wrote arrangements for Count Basie, Stan Kenton, Woody Herman and Buddy Rich, as well as vocalists Sarah Vaughan, Carmen McRae and Dakota Staton.

His acknowledged arranging mentors were Budd Johnson and Dizzy Gillespie. In his last decades Albam turned to teaching – notably at the prestigious Eastman School of Music in Rochester, New York – but in 1996 was the arranger for saxophonist Joe Lovano’s album Celebrating Sinatra, employing strings and voices. Critic Jason Ankeny had earlier praised Albam for “his tight, brisk arrangements [which] favoured subtlety over flash”, while he also exhibited a “wry sense of humour”. This is evident in the titles of many of his original compositions. In his obituary of Albam, Steve Voce quoted him as having said “I never forget that the soloists are as least as important as the writing, if not more important”.

Albam was particularly proud of the performances by the celebrated artists featured on CD1, commenting that “I had the blowers, the guys who dig deeply and endow writing with the necessary richness of improvisational content. This is just what I wanted!” And he got it. For example, Cohn, Woods, Sims, Mulligan and Farmer play with zest and subtlety on My Sweetie Went Away; while Brookmeyer and Woods are heard to maximum effect on Blues From Neither Coast. On Albam’s composition Poor Dr. Millmoss – inspired by a famous James Thurber cartoon – Cohn plays baritone alongside Mulligan. A laidback rendition of Jive At Five features a tightly muted Sweets Edison with sterling support from his colleagues, including Geller and Kamuca.

CD2 opens with Sweet’s Bread, a showcase for an on-form Edison, with immaculate backing from Williamson, Geller, Mariano, Levy, Shelley Manne et al. The four-part The Blues Is Everybody’s Business begins promisingly with loping ensemble playing and good solos from Woods and Cohn. But despite the glittering personnel, the remaining sections – apart from Part 4, where everyone cooks – are hampered by syrupy strings, and this listener’s interest began to wander. Although not well-received at the time, it was later used at the Eastman School as a required study score.

The remaining four selections are perhaps Albam’s finest arrangements, performed by an all-star aggregation including Joe Newman, Gene Quill, Ernie Royal, Bob Brookmeyer, Al Cohn, Hank Jones and Osie Johnson. The album – released as Manny Albam And His Jazz Greats – Play Music From The Broadway Musical West Side Story – earned a Grammy nomination. Manny, who attended an early performance of the show, wrote the perceptive liner notes for the subsequent LP: “In creating a jazz version of music from this score, I became aware of the thematic sense of it in the form of material that a jazz player could draw from it”. With typical generosity of spirit (and honesty) he continued “I owe a great deal to the musicianship of every player in the final analysis of the sounds heard here. The soloists and ‘part players’ alike share with Leonard Bernstein, who provided the impetus with his highly imaginative and provocative score, the spotlight for the production of this album”.

Anyone considering buying this splendid and overdue compilation should begin with the West Side Story excerpts. If not immediately converted to the joyous gospel of Manny Albam, they should seek medical or psychiatric advice.