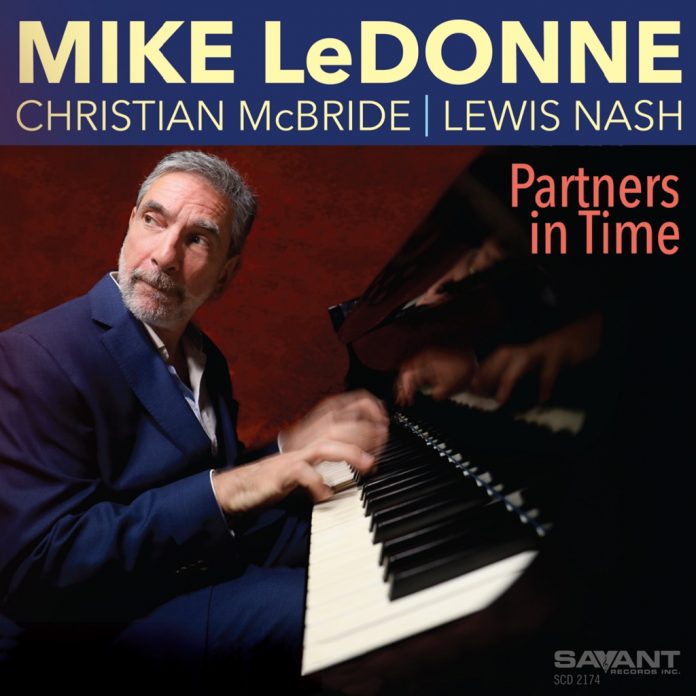 The body of work by Mike LeDonne is imposing. The 63-year-old pianist and organist has recorded dozens of albums as a leader and sideman. He was the pianist of choice of Milt Jackson, Benny Golson and Sonny Rollins and the old-school soulful aesthetic of these and other legends pervades the playing of the Bridgeport, Connecticut-born jazz artist. Partners In Time is his 11th outing on Savant and features fellow New York and international heavyweights, bassist Christian McBride and drummer Lewis Nash.

There’s more to LeDonne’s mainstream jazz philosophy than zestful commitment. You got to be able to deliver. And LeDonne is what soccer coaches call a multi-functional player. The MFP excels on differing positions on the field and his average mileage is beyond belief. His scoring rate is exceptional and he rarely scores an ugly goal. Translated to jazz slang, LeDonne has killer chops, swings you to the ground and tells the hell out of a story. Furthermore, he writes a darn fine tune.

LeDonne’s most challenging composition on Partners In Time – the title refers to the fact that although there has been a musical bond between the members of the trio since the 90s, it has been ages since they cooperated – is Saud, an overwhelming tribute to McCoy Tyner. McBride’s long, Eastern-flavoured introduction is phenomenal, the perfect kick-start to a modal blast that bravely updates India and Crescent from the eponymous John Coltrane Quartet. LeDonne’s lines bounce off the hefty sound wall of the rhythm section with the reckless abandon of balls in a pinball machine.

Fast-paced bop like LeDonne’s Bopsolete and the mid-tempo swing of Ray Brown’s Lined With A Groove clearly reveal the special rapport between LeDonne, McBride and Nash, which involves a lively blend of groove and excellence. Meshing with LeDonne’s acute statements of Lined With A Groove is a bit of stride style playing, likely a remnant of the journeyman hours that the pianist spent with the late Jaki Byard.

Mike LeDonne maintains a parallel career of pianist and Hammond organist with his acclaimed soul-jazz outfit The Groover Quartet. Obviously, each side of his personality has improved the quality of the other considerably. Here the Rodgers/Hart ballad My Funny Valentine gets an upbeat treatment that successfully harks back to the glory days of Philly soul. In general, LeDonne’s unusual gifts allow him to hark back generously to classic jazz, without resorting to the construction of museum pieces. Instead, he remains one of the prime masters consolidating the position of straightforward jazz in the 21st century.

Jazz Journal - 26 August 2020
This record contains some of the finest modern jazz ever put on record. The period was a particularly good one for Miles Davis. Although he had not yet won...