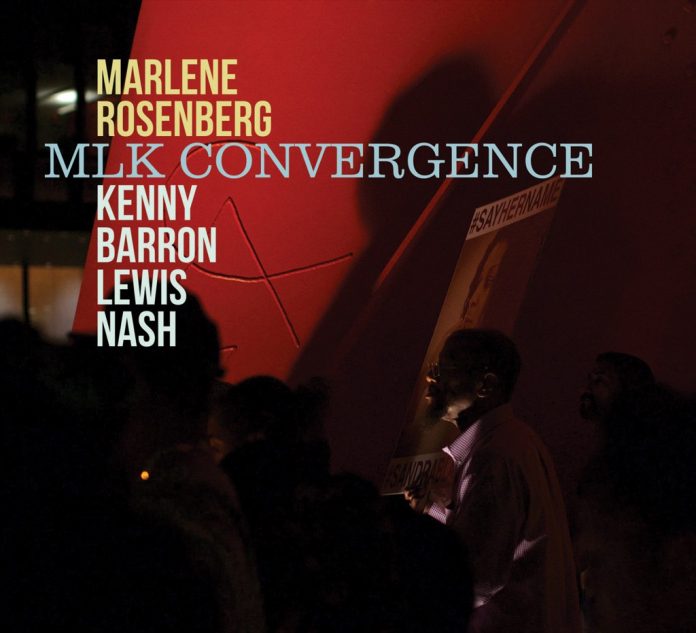 Both title and line-up of bassist Marlene Rosenberg’s MLK Convergence piqued my interest. MLK is a reference to Reverend Martin Luther King. Rosenberg connects the message of King with horrible tragedies like the strangling of Eric Garner by the police in New York City in 2014. She offers “this music as an expression and in an effort to voice the current reality that exists in America, and ‘the dream’ of balance, harmony, and understanding that could expand exponentially”. MLK is also the acronym of a promising line-up that includes veteran class act pianist Kenny Barron and New York City stalwart, drummer Lewis Nash. Monster bassist Christian McBride is featured on two tracks.

Marlene Rosenberg dips her charts in blood and decorates the remains with sugar magnolias. Her compositions suggest affinity with Carla Bley: vamps and complex cyclical lines comprise her means of expression. The most successful example of her method is Circle Story, a snappy, uptempo sequence of intriguing patterns in 3/4 time. However, the bulk (Togetherness, American Violet, The Line Between) feels like material that strives for intensity but doesn’t quite reach it. Her protest song, Not The Song I Want To Sing, is a daring exposé of rap and spoken word featuring vocals by Tom Burrell and Robert Irving III, regardless of the rather unassuming drum and bass pattern.

Smooth and responsive accompaniment is Rosenberg’s forte. The abundance of bass intermezzos, albeit solid, doesn’t work in her favour. Kenny Barron, who launched a fruitful career in the 60s as collaborator with Dizzy Gillespie and Yusef Lateef, is one of the most elegant pianists of the old guard. The story that he weaves in the fabric of the spirited Rosenberg composition The Barron is thrilling. In general, Barron performs on his usual high level but he offers few sounds of surprise. Barron must’ve felt slightly out of place in Rosenberg’s experimental groove, much like David Niven would’ve felt had he starred in 2001: A Space Oddity.

Stevie Wonder’s Visions and Love’s In Need Of Love Today may aptly reflect Rosenberg’s worries about racism and dreams of change. This, however, doesn’t prevent the group from turning in unadventurous covers that add little to the canon of Wonder covers. MLK Convergence’s sincerity is praiseworthy, but its musical elucidation leaves something to be desired.

Simon Adams - 05 May 2020
When he started out composing The Movement Revisited, Christian McBride intended it to be a “musical portrait of the civil rights movement”. Not for a minute did he understand...