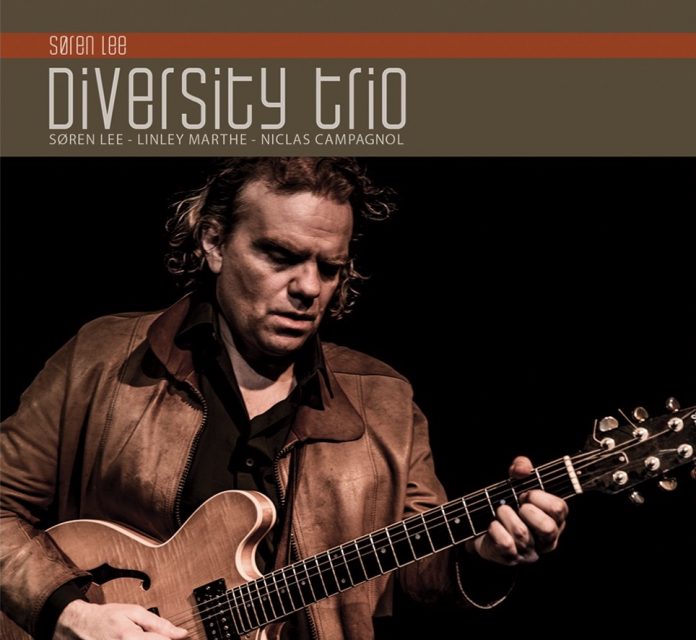 While the influence of John Scofield’s Gramavision years runs through this music like high-voltage current, it is equally true that the great American has seldom played with Lee’s ferocious intensity. Just like Scofield the Danish-born guitarist is well-versed in the music of Jim Hall, having studied with the late guitarist in New York at the turn of the 90s. Lee’s almost eponymous debut Søren Lee Quartet (Bellaphon, 1991) featured none other than Ray Brown on bass, perhaps giving some idea of his subsequent career trajectory.

Jumping across several decades it is gifted Mauritian electric bassist Linley Marthe (Zawinul Syndicate, Omar Hakim) who now holds down the chair, while the ever versatile Swede Niclas Campagnol (George Garzone) rounds out this explosive trio.

One crucial difference to those classic 80s Scofield sets is that Lee has opted for a pared-back, keyboard-less sound. With each member of the trio gaining licence to play freely, the impact is immediately felt on the boppish opener New Possibilities. By the second chorus Campagnol is already dropping complex paradiddles, and as Marthe roams the neck with Jaco-like abandon, Lee’s searing solo raises the temperature.

Ma Cherie Eva is a slow-burning ballad with many twists and turns, and one of two tracks dedicated to Lee’s wife. It takes its time to find its groove, the guitarist wringing out every last drop of blues-soaked emotion. Title track Diversity, by contrast, opens in a hail of three-way crossfire, each player sparking ideas off the other before settling on a common orbit, and Lee’s blistering chromatics evoke the liquid fluidity of vintage Mike Stern.

There’s A Reason is another of Lee’s dreamy ballads, but this time the prevailing mode is more gospel tinged than bluesy. The attractive melody of Dancing Awa carries echoes of Scofield’s Now She’s Blonde, its African lilt a reference to the Senegalese heritage of Lee’s wife. Fast Burn is a staggeringly virtuosic tour de force which fully delivers on the promise of its title, while the bold decision to close the set with a fragile ballad shows a pleasing appreciation of nuance.

Although Lee’s primary influences may never be too far away, he has adapted an established language to his needs. He plays straight from the heart, and reminds us just how good this strain of music can be.

Simon Adams - 29 January 2020
The three musicians in this trio first worked together in the quartet let by American guitarist John Abercrombie in the last few years before his death in 2017. It...