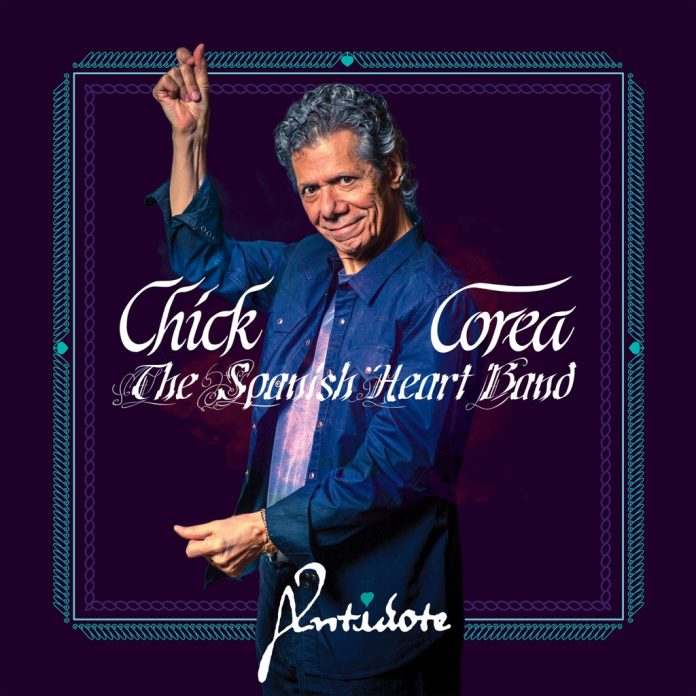 Most jazz heads conversant with the 50-year-plus playing career of Chick Corea will know that from the pianist’s earliest solo recordings, through to his musings with Miles Davis, jazz-rock rumblings with Return to Forever and all the Akoustic, Elektric or Trilogy bands he’s headed up, the music of Spain remains at the heart of his work.

Taking inspiration, and reworking certain tracks, from two key albums – My Spanish Heart (1976) and Touchstone (1982) – not to mention the influence of artists such as João Gilberto, Eddie Palmieri and Cuban percussionist Mongo Santamaria (with whom Corea played in 1962), this ambitious new album pushes the 75-year-old pianist to new creative heights, thanks to some fantastic arrangements and the spirited feel of a brand new band.

A delectable cocktail of cowbell, conga, timbales and mariachi-style trumpets signals the start of the set and the title track, dryly delivered by the brilliant Rubén Blades. The instrumentation is seductive and free-flowing and provides the perfect playground for both the Panamanian vocalist and also Corea, who flirts between soft, spacious chords on the piano (under vocals and nylon-stringed guitar) and pitch-bent montuno lines on synth as the intensity ramps up and sprawling solos lead to more vocal lines.

From here Duende and a split-section arrangement of Yellow Nimbus are rearranged from Touchstone. The former is more horn-driven than the orchestral original, while the latter a snappier affair with crisp snare tattoos and the fancy flamenco footwork of dancer Nino De Los Reyes, proving the perfect accompaniment to Corea and Josele’s urgent unison runs. Anchored by the groove team of bassist Carlitos Del Puerto and drummer Marcus Gilmore (the grandson of Roy Haynes no less), an 11-minute samba-driven drive through De Lucia’s Zyryab is a delight and follows an equally upbeat play around Tom Jobim’s Desafinado featuring the curvaceous voice of Maria Bianca atop the tinkle and chime of Rhodes, flute and more rattling percussion.

While it’s unsurprising to hear Corea unravelling real disciplined, classically formed pieces in his music, the rich and harmonic piano lines he lays over a funky figure from Del Puerto during Pas De Deux (from Stravinsky’s ballet The Fairy’s Kiss) adds a whole other vibe to this vibrant, samba-flavoured set. Formally a neo-classical instrumental piano piece itself, My Spanish Heart (from the album of the same name) is delivered here as a vocal track (again spotlighting Blades), underpinned by piano, guitar , brass and a tasty kit groove.

Originally a dedication to his father and formerly alive with fiddles, handclaps and Stanley Clarke’s low-end and buzzy double bass, Armando’s Rhumba (also from My Spanish Heart) is reimagined here – more conga, cowbell and horn heavy. Corea’s distinctly boppy breaks from the off raise the rhythmic tension in what builds towards a full-swing percussion workout ordered by brass stabs.

The Antidote retains a breezy, shoreline feel throughout and makes for one of the finest albums of Corea’s career. Reimagining material of old to blend with some new, it’s a record solid with great songs, hooks and beats that conjure many contrasting sketches of Spain with every play.