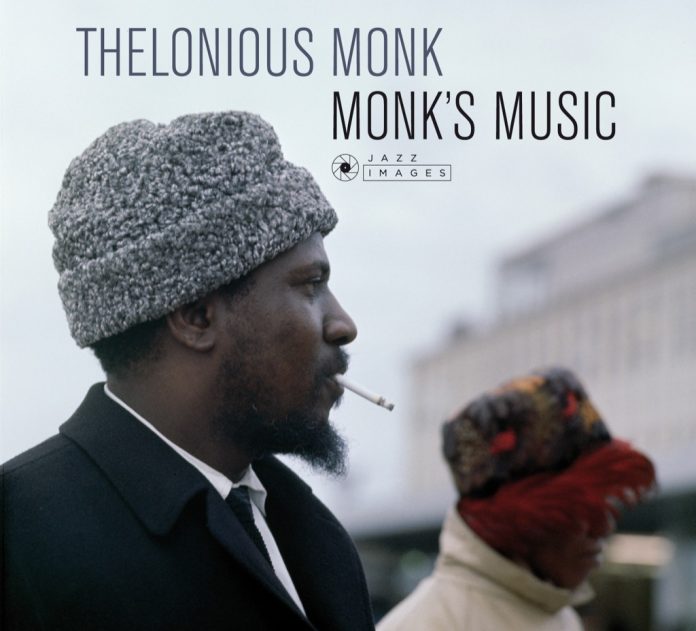 It’s unfair when a CD like this falls on the desk of a reviewer – not for the reviewer but for any other album, such is its pre-eminence. A couple of good photos of the great man, by Jean-Pierre Leloir, but I still have a fondness for my old Riverside LP with Paul Bacon’s design –Monk sitting in the cart.

It’s well-documented that the link between Monk and Hawkins went back to Minton’s and the 40s, as is the development in Coltrane’s playing under Monk’s tutelage as testified by the saxophonist and witnessed in the famous Five Spot recordings of 1957. But here was the meeting of the long-established giant of the tenor with one of the future, in the context of playing the music of one of the foremost modern composers in post-war jazz. It’s difficult to imagine a session being as successful with anyone else but Monk. That it was called Monk’s Music is revealing – even Abide With Me was composed by Monk, albeit it William H., and although the pianist is absent on this briefest of tunes, it’s arranged in his style so nobody is in any doubt who is directing proceedings. As if to prove this point, Monk is heard calling for Coltrane to solo on Well You Needn’t.

Hawkins is in fine form; the first version of Ruby, My Dear on this album is a vehicle for him and shows what a wonderful ballad player he was: total command and earthy tone, hints of growls at the edges and lush textures. The tracks with the larger formations reflect how rich the scores were and how for Monk the arrangement was the composition. All the soloists respond to the material and there is an overall feel of a relaxed and inventive work-out by musicians at ease with each other and with how they should approach Monk’s music, led of course by the man himself. As Jeff Langford wrote of this session some time ago (JJ, November 1970) in his informative and perceptive series of articles titled Monk’s Horns, “Monk himself is undoubtedly spirited; splashing down notes like whole telephone directories, and approaching the piano from that unprecedented angle … beautifully authoritative”.

Gigi Gryce’s composition Blues For Tomorrow is included (recorded at the same session) and features all the musicians. Gryce could play with a tone and phrasing that seems to be suited to Monk and it’s no coincidence that he was one of the very few altoists Monk used – in Gryce’s case several times.

The CD is made up with three tracks from the July quartet session with Coltrane – “riveting performances, pure and unusually gentle for Monk, who almost seems to be coaxing music out of Coltrane’s horn at times”. (Langford) That’s certainly true on the final track, Trane’s version of Ruby, My Dear, a sumptuous rendition and a wonderful balance to Hawk’s earlier one. You don’t get much better than this.