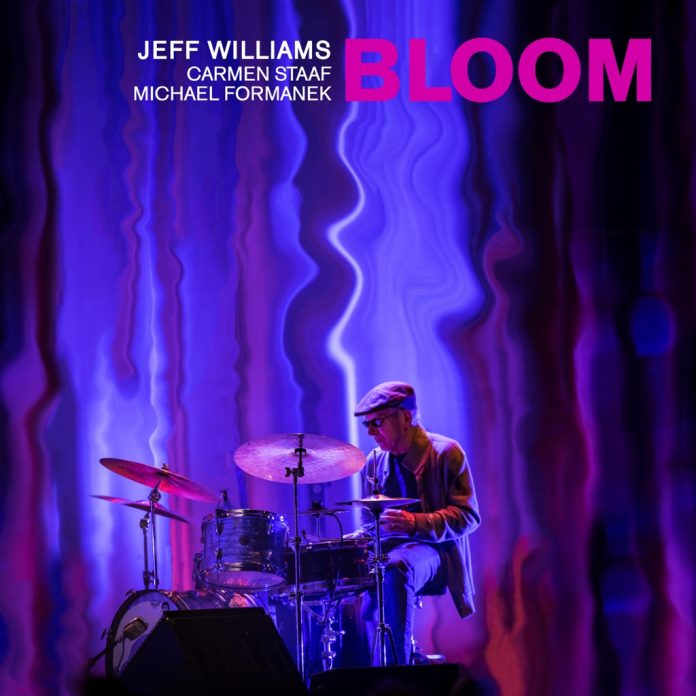 Jeff Williams is a very well-known drummer in the jazz world, and has been for decades, having played and recorded with musicians such as Lee Konitz, Stan Getz, and Dave Liebman. On his latest album, Bloom, he leads a trio through a series of crisp, free-flowing tracks, full of tangential melody and improvisation.

Bassist Michael Formanek brings further expertise to the trio, having worked with Freddie Hubbard, Joe Henderson and even Elvis Costello. On the piano, Carmen Staaf utilises harmony and rhythm to create interesting solo passages, especially on Short Tune and A Word Edgewise.

The only non-original composition is Buster Williams’s Air Dancing, which is played with great feel and emotion, and features an excellent solo by Formanek.

Other highlights on the album include Northwest, where a simple progression gives way to captivating musical exploration, and the final track Chant, which opens with atmospheric interplay between piano, spacious use of symbols, and a bowed bass, before building in intensity.

Overall, Bloom is a great success, rewarding both casual and serious listening and demonstrating the vast potential of the trio format.

Sophie Prior - 13 April 2021
To hear Swiss pianist Nik Bärtsch’s Entendre is to hear the piano being explored in diverse ways. Not only used as a melodic medium, but also as a rhythmic...