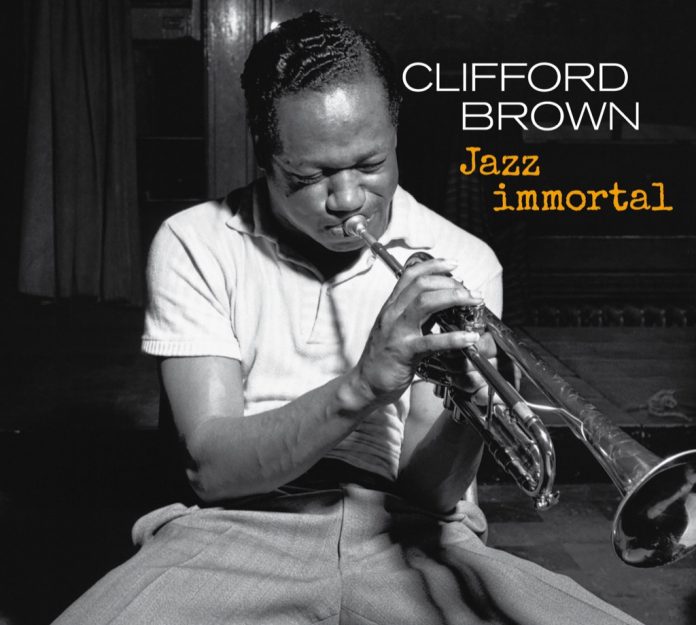 In 1954 Clifford Brown left NYC to spend the summer in Los Angeles where he organised the quintet with his good friend Max Roach which became one of the finest small groups of the era. One of their first bookings was at the Tiffany opposite a group co-led by Art Pepper and Jack Montrose. Dick Bock decided to record Brown and Roach with some local musicians and Montrose was selected to write the arrangements.

In 2000 Jack Montrose gave me some of the background to the sessions: ”Dick decided the instrumentation and the personnel and it was his decision to do Blueberry Hill and Gone With The Wind not Brownie’s. Clifford had an old studio upright at his motel in the West Adams district and I used to visit him every day to work on the music which was written with Max in mind. Unfortunately he got into a money hassle with Dick and bowed out at the last minute so Shelly Manne was called and he played just beautifully. I spent about two months writing the charts and we rehearsed the band three or four times over at my place. As you can hear on the record everyone jelled immediately and it was a very friendly date”.

A few months earlier Brown had been in the trumpet section of Lionel Hampton’s barnstorming big band but here he embraces quintessential West Coast cool, making the date a unique entry in his sadly slim discography.

The tricky charts are immaculately performed by the hand-picked ensemble beginning with Tiny Capers which becomes a fugue in Montrose’s hands. Clifford’s well-known sunny disposition is reflected in his memorable Joy Spring with its chromatic harmonies full of traps for the unwary. The solo spotlight naturally shines brightly on Brown throughout and he never disappoints but Zoot Sims (Daahoud, Finders Keepers) and Bob Gordon (Gone With The Wind, Blueberry Hill) have their moments.

MatchBall has included Bones For Zoot and alternative versions of Tiny Capers and Gone With The Wind not available on the original album. For added value they have included nine titles with Lou Donaldson.

Michael Tucker - 06 November 2019
As anyone who has caught him live will surely attest, Rantala is one special barrel of tumultuous creativity. His distinctive pianism can flow as from some primal well of...