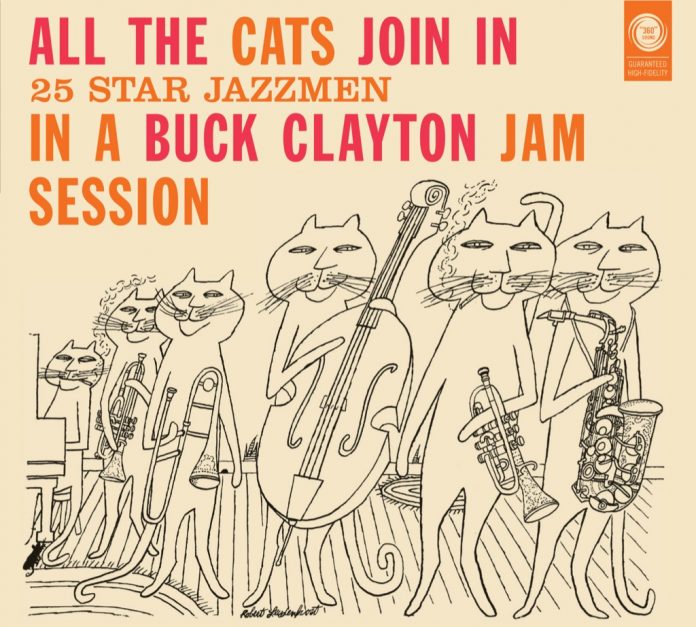 By inventing the term “mainstream” in about 1953, the critic Stanley Dance did us all a favour. Mainstream jazz musicians were those who were neither modernists nor revivalists, beboppers nor mouldy figs. They were the ones who had come up through the swing era and were, by the early 50s, mostly at their mature best. Once it had a brand name, their kind of music could be promoted effectively, with the result that a lot of fine musicians were kept busy and we now have a stack of their records to enjoy. The records tended to come in bumper parcels. For instance, there were the nine albums produced by Dance on the Felsted label, four delectable 10-inch LPs on Vanguard by the Vic Dickenson Septet, and Columbia’s five Buck Clayton Jam Session albums, of which this is the fourth, with some extras added.

Introducing the idea behind the sessions, producer George Avakian wrote: “These are completely informal, unprepared performances. The men came in and just blew, with no restrictions.” Long-playing records were still fairly new in the early 50s, and the first album ran to one number per entire, 25-minute side. By the time this one came to be recorded, the novelty had worn off and there was a certain amount, if not of restriction, then at least moderate restraint. The solos are shorter and there are even a few sketchy arrangements. It still sounds pretty informal, though, and it’s good to hear players such as J.C. Higginbotham and Kenny Kersey who might have vanished from the scene had it not been for the mainstream movement. And what a treat to find the original Basie rhythm section, fully operational, on one of the tracks!

Avakian and John Hammond chose the musicians, and it turned out to be a subtle mix: big names like Coleman Hawkins, Joe Newman, Buck himself, and even Woody Herman, on equal terms with youngsters (youngsters!) like Ruby Braff and Al Cohn. And, seasoned professionals that they were, they never took a chance with the bass player; it was Walter Page or Milt Hinton all the way.

Listening to it now, I find it enjoyable, if a bit samey. I wonder if it might not have been more effective to have a series of small groups rather than the whole lot, taking turns. Nevertheless, there’s so much good, solid, unshowy jazz going on here, 60-odd years ago, that I must propose a heartfelt vote of thanks to Stanley Dance for saving an entire jazz generation from oblivion with a single word.

Bruce Crowther - 08 March 2019
This is the debut album of the highly talented tenor saxophonist Helena Kay. After studies at the Guildhall School of Music she has appeared at clubs and festivals, particularly...

Jazz Journal - 28 February 2019
Jazz a la King - The three main centres for modern jazz fans these days are the Marquee, Dankworth and Flamingo clubs. I must admit that I don't spend...