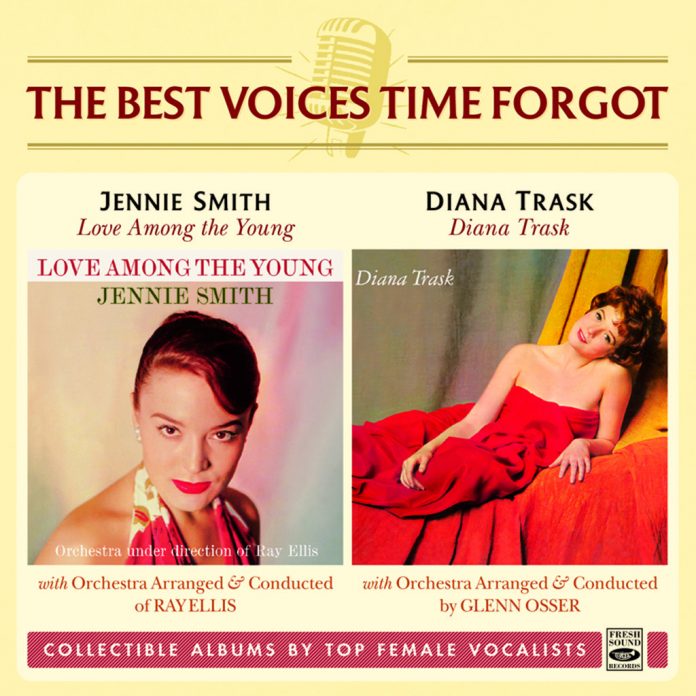 The bigger this Fresh Sound series of The Best Voices Time Forgot gets, the more it positively evokes an era which seems long passed.

That’s not to suggest female vocalists are thin on the ground these days, it’s just that these voices have now been rescued for posterity and a new audience awaits them, many of whom perhaps weren’t even born when they were made. This is only a good thing, better late than never…

Smith and Trask are on the superior pop side of things as opposed to jazz, but I for one am not fussed about the distinction, not when Trask can wring a little personal poignancy out of My Funny Valentine, where her work is markedly in sympathy with Glenn Osser’s arrangement,  and which is followed up by what might once have been referred to as a swinger in the form of I Hear Music.

Arguably the album has been eclipsed as an art form in this era of playlists and shortened attention spans. If so then it throws both these albums into stark relief as they’re models of judicious programming. So Smith’s reading of Love Among The Young, recorded like the rest of the album when she was barely out of her teens, and which she sings with an authority exceeding her years, is followed by a carefree reading of Cross Your Heart, in which she wrings out of the lyric a measure of unaffected joy that’s quite out of step with the fraught times we’re living through.

Discography
(1) Love Among The Young; Cross Your Heart; Impossible; A Fine Romance; A Very Special Love; Teacher, Teacher; While We’re Young; ’S Wonderful; Young And Foolish; There Will Never Be Another You; Take Me In Your Arms; All I Do Is Dream Of You; (2) Hello Young Lovers; It Might As Well Be Spring; Little Girl Blue; The Gipsy In My Soul; Let’s Fall In Love; My Funny Valentine; I Hear Music; Spring Never Comes; By Myself; Let’s Face The Music And Dance; Spring Is Here; Temptation (73.36)
(1) Smith (v) with orchestra arranged and conducted by Ray Ellis. New York, 1958.
(2) Trask (v) with orchestra arranged and conducted by Glenn Osser. New York, 1960.
Fresh Sound FSR V110