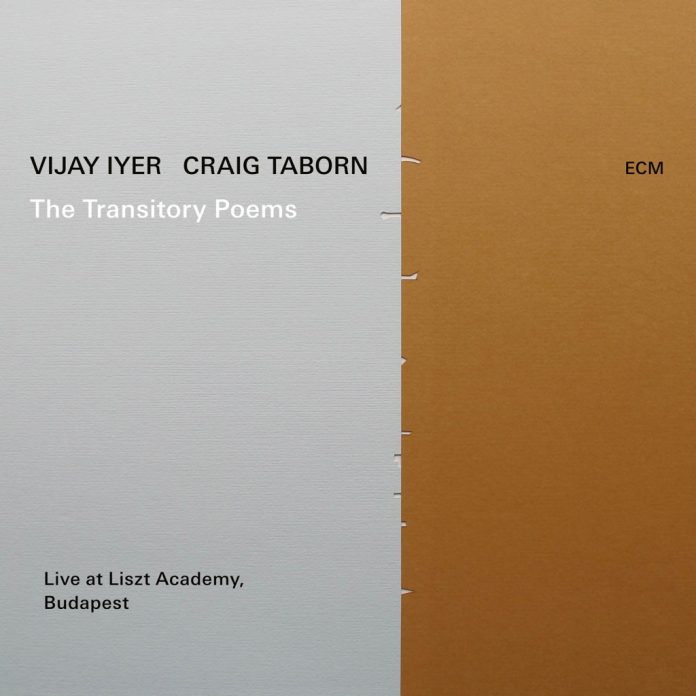 ECM’s cover artwork can often be somewhat random in impact, its black and white images or slabs of colour merely hinting at the music inside. For this duo set by two of America’s finest young pianists, however, designer Fidel Sclavo has got it exactly right.

Two bars of solid colour lie side by side, a grey and a dull ginger, held together by loose stitching. Which colour represents which musician is not made clear, as the image is reversed on the back of the outer card box and the sleeve notes, but its symbolism is clear: two distinct people with two distinct musical approaches tied together in mutual endeavour.

That endeavour began when both pianists worked with Roscoe Mitchells’s nine-piece Note Factory, their duo forming in the crucible of that band. Eventually, they got the chance to perform as a duo themselves, in a year that marked the passing of pianists Cecil Taylor, Muhal Richard Abrams and Geri Allen, and sculptor Jack Whitten. This set therefore is largely a series of homages, often reverential in feel but spacious in concept.

It opens as a formal concert performance, as each pianist makes his mark , but then relaxes, with Sensorium almost flippant in places, Kairòs initially just melodic fragments before exploding into rhythmic intensity, Shake Down a self-explanatory exuberant workout, Clear Monolith a stately dance with a beautiful ending.

Throughout, the two pianists mesh their lines almost imperceptibly, dovetailing their rhythms and embellishing melodic details but always giving the other room to breathe. In places, their music can be austere, even daunting, but throughout there is an underlying empathetic warmth and sometimes tenderness.

For two quite different stylists to have a produced a set of such unified coherence is a remarkable achievement. Full marks and many stars all round.

Bruce Crowther - 05 January 2022
Born into the heart of mainstream music – mother Jane a singer, father Leonard a jazz critic, godmother Billie Holiday – Lorraine Feather has been singing professionally for the...