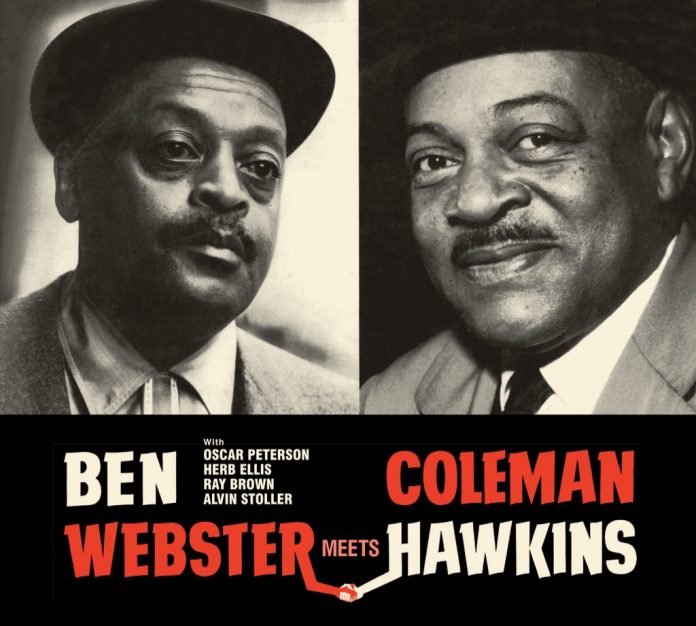 A classic album from the 1950s, Coleman Hawkins Encounters Ben Webster first appeared on Verve in the USA, the UK release changing the title to Blue Saxophones. Everything thereon was superb, both men still in their prime and playing the kind of music they clearly loved.

Now, more than 60 years on, here it is again and the music is just as magical. The playing of the co-leaders is rich, inventive and overflowing with passion. Throughout, Webster and Hawkins not only encourage one another’s imagination but also allow the listener a glimpse of their musical souls. Although both play tenor saxophone, they are instantly identifiable because the sound they produce is so different, Hawkins playing with a full-bodied tone, while Webster’s warm breathy style remains one the most distinctive in jazz.

It has been said often by masters of jazz, especially tenor saxophonists, that as they play their instruments they are hearing in their heads the lyrics. Listening to this album it is clear not only that this is true but also that both these musicians are in tune with the intentions of the lyricists. Indeed, at times they express emotions not always apparent when these songs are sung by many singers.

It’s never been beyond the reach of collectors since its first release, but those who still treasure the original album will note several additions. These include some alternate takes (shorter versions for promotional use) while Maria and Cocktails For Two were too much for LP format but were released later on Coleman Hawkins And Confrères. There are also two tracks from Hawkins alone (My Melancholy Baby and Ill Wind, released originally on The Genius Of Coleman Hawkins) and Webster alone (Where Are You and Ill Wind, released originally on Soulville). On these two last-named tracks, which were recorded a day earlier than all the others, Stan Levey replaces Stoller.

A few years ago, Essential Jazz Classics released everything assembled here and in the same sequence. Included are new liner notes by Bernard Lee and Nat Hentoff’s originals. On reflection, it is no surprise that this has never gone away; after all, it sounds today just as good as it did all those years ago. Wonderful music, romantic but never mawkish, and worthy of a place in anyone’s collection.