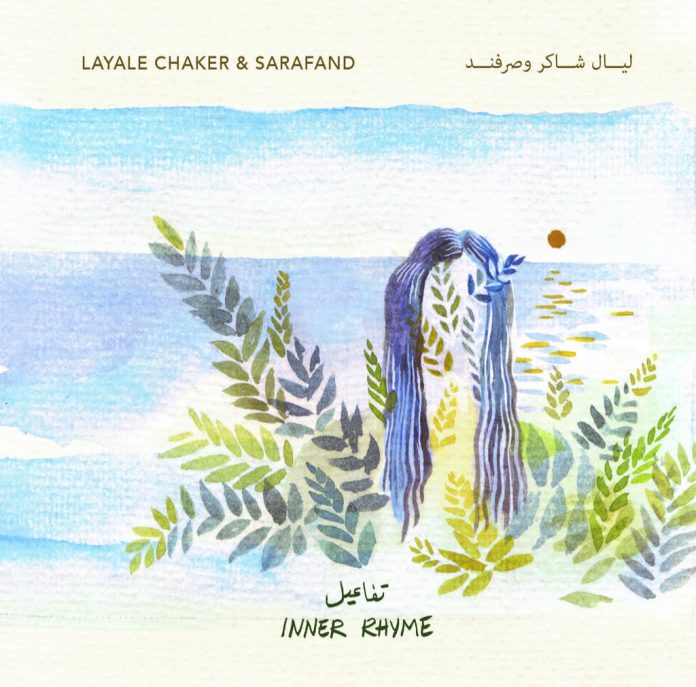 A veritable Silk Road of musical traditions is evoked, explored and given a refreshing contemporary twist in Inner Rhyme, the debut recording from classical Lebanese violinist Layali Chaker. She musically translates 12 classical Arabic poetic forms, whose metre inspires much of the album’s rhythmic heart.

The first two tracks, Return To Jaykur and Ushaq, introduce versatile drummer Adam Maaloouf, of Sarafande, featuring both a bold hand-drum (daf) solo and percussive accents (riq, or Arabic tambourine). Both pieces conjure up shades of Tunisian oud artist Anouar Brahem in an ECM vein, with tuneful flavours of pan-Arab cinema snaking around the Sharqi modal explorations. The Arabic maqamat (modes or scales) show Sarafande’s rhythm section probing the common ground intersecting the genres. Here begins an emotional journey for the listener, with the double bass walking and the violin dancing companionably along a gypsy desert road, taking in many influences along the way.

It is not until the third track, Relentless, that you really start to notice the jazz elements and improvisation kicking in, with dazzling piano trills from Phillip Golub in a feisty duel with Jake Charkey’s heart-wrenching cello.

By contrast, Interlude (Half-Light) illustrates the true, slow, raw power of the taqseem (instrumental solo played across the Near and Middle East). On this, Chaker draws out the voice of her violin, making it mourn, wail and whisper, from the fourth track, where it holds a meaningful conversation with the cello, to the first of the Mkammas trilogy, Suite 1: Hammas, where she makes her instrument tell stories of exile and of longing for home. The second chapter, Mkammas Suite II, is more upbeat and go-getting, while also insinuating a sense of foreboding. On Frah Al Donniyeh, an atmospheric string drone introduces itself, going on to accompany a rather startling, rollercoaster percussive piece, full of dramatic highs and lows. Here, too, the questioning double-bass paintbrush of Nick Dunstan illustrates these passages alternately with illumination and shade.

The third piece of this section, Suite III: Ya Fajr, as its name suggests, has the music slowly dawning like the new day upon the listener, realised by way of subtly placed, lyrical jazz piano touches. Led by the violin into a joyful awakening, this is followed by the whole ensemble joining in a warm mid-tempo greeting to the sunrise. The strings double up together to play the melody at first. Then, the cello seems to go off at a tangent, at first agreeing, then just as fluently concurring, with the main violin theme – all of which is light worlds away from Shekhu Kannah-Mason.

Alight Here sees the band bringing the travelling theme up to date, embracing the pulse and heart of a train humming along the track, punctuated with piano and drum accents, in a recognisably straightahead jazz vein. Here and there, the piano imitates the plucked sound of the Arabic qanun, its distant and ancient ancestor. By contrast, and alongside this, there is a staccato blend of strings, drums and bass, which brings a distinctly European, syncopated feel into the mix.

On The Trunk Of An Olive Tree brings to the ear the kind of meditative harmonic aspect which many jazz players naturally inhabit. While Chaker’s strengths as a composer and arranger display a strong melodic instinct, combined with a well-grounded rhythmic sensibility – much like the popular songs of her native Lebanese culture – the band members complement her playing, each in their own way. Their journey ends with the contemporary fusion- flavoured Postlude (Folded) which, with its uneasy dissonance, could quite feasibly be the theme tune to a black-and-white arthouse film.

The main point of this album, and the reason it merits repeated listening, is its exploration of two major art forms – the poetry of the Near and Middle East and improvisation. The ability to infuse poetry with instrumental improvisation is a rare gift for a musician. Quite reasonably, Chaker’s melancholy solo improvisational musings have been likened to Portuguese fado.

The patterns of the seasons and of the natural world seem to the listener as intrinsic to Inner Rhyme as they are to folk music itself. It also calls to mind more contemporary folk-rock-jazz fusion, with Chaker’s violin taking on the mantle of lead folk singer. Because of this, and rather unexpectedly, Maddy Prior, Sandy Denny, harpist/vocalist Joanna Newsom, “sing-fiddler” Seth Lakeman and their respective alchemies of English folk-rock, pop and jazz, as well as the classical elements – which Newsom and Chaker have in common – spring to mind as parallels.

There is a plethora of great concepts on this album; it will be interesting to see in which direction Layali Chaker will take them next.