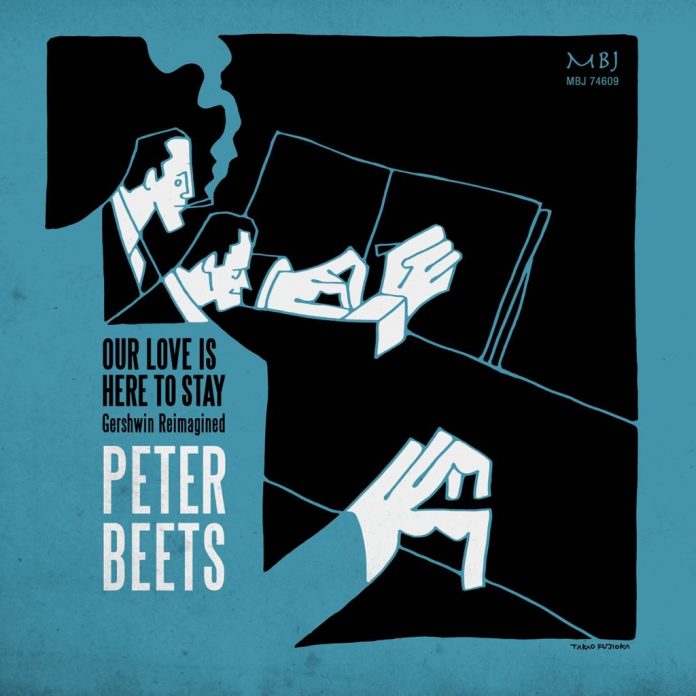 Peter Beets is just 47 years old but a veteran of Dutch jazz. The pianist displayed his considerable talent on stage from a very young age and has been constantly in the spotlight ever since. A vivacious, not to say hyperkinetic chap, one might see his lanky figure race through the entrance of a cozy jazz bar in The Hague and, before sitting in with his usual aplomb, find him intensely engaged in a detailed appreciation of the drummer’s ride-cymbal skills.

He’s a good-humoured but determined pro. He’s played opposite pianist Roger Kellaway at the stately Carnegie Hall in New York and cooperated with such legends as George Coleman, Johnny Griffin and Elvin Jones and is the featured pianist of the Jazz Orchestra Of The Concertgebouw.

The Beets approach to the keyboard is reminiscent of Sesame Street’s Cookie Monster plundering the biscuit section in the supermarket. It is therefore no surprise that he’s all over the keys on his 15th album as a leader, Our Love Is Here To Stay – Gershwin Reimagined, yet again an effort on his part that is partly concocted from the styles of such impeccable and blues-drenched icons of piano jazz as Oscar Peterson and Phineas Newborn Jr. Plenty of dazzling runs and repeated blues trills underscore solid story-telling with introductory remarks, a middle section and powerful climaxes.

It’s all about fluent and vibrant swing. The reimagining of Gershwin offers a poised reading of the downtrodden path that is Summertime, but more interestingly, a transformation of two Gershwin compositions that are forever engraved in the memory of jazz fans through the immortal versions of Charlie Parker: Embraceable You and Lady Be Good. The catchy bounce of the Carribean rhythm that underlines these interpretations serves as a splendid example of the synergy between Beets, bassist Tom Baldwin and drummer Eric Kennedy. Kennedy’s paraphrase of Art Blakey’s famous drum intro of Blues March succinctly kickstarts Our Love Is Here To Stay.

A more restrained tonal palette is offered with the balladry of I’ve Got A Crush On You and I Loves You, Porgy. The delicate voicing of Porgy is decidedly hypnotic. It touches upon our vague feeling that there might be more between heaven and earth than is dreamt of in our beer mugs. An extra tad of that peculiar sense of foreboding in his playing would’ve worked well as a contrast with the overwhelming approach of the wolverine Beets.

Still, Beets allows himself the odd, dark-hued dissonant note on the album’s uplifting Gershwin interpretations. ’S Wonderful, definite highlight as far as flamboyant virtuosity is concerned, is taken at a relentless and effortless breakneck speed. He’s picking up Gershwin in his Tesla Roadster.

Nic Jones - 10 August 2021
This very band, with the same membership, put out three live albums in 1977 and 1978. As this is their first album since those arguably heady days the band...