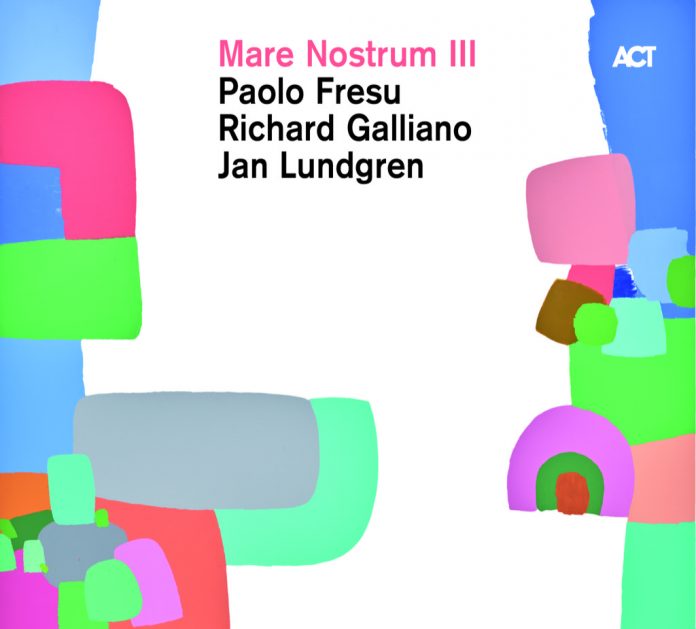 The first Mare Nostrum album was recorded in Italy in 2007, the second in France in 2014. With the appearance of this Swedish recording, the third disc devoted to this pan-European chamber music in just over a decade, one wonders if the project has come to its natural conclusion – or whether these three exceptional, deeply lyrical and highly attuned musicians may choose to stick with an endeavour which has long proved to be as popular as it is artistically rewarding.

As with the previous two releases, Mare Nostrum III is strong on melody and mood, its exquisite trio dynamics set in service of harmonic and rhythmic nuance. Galliano’s haunting Blues Sur Seine opens the programme with the piquant fragrance, rather than the full force, of the blues; and if his Le Jardin joins Lundgren’s ostinato-sprung Love Land, Swedish-folk-stepped Ronneby and more measured Love In Return in pumping the blood some, the predominant mood remains one of reflection and reverie.

Fresu’s broadly cast phrasing on both trumpet and flugelhorn – hear his Pavese – is throughout a thing of wonder, while Galliano and Lundgren supply all manner of beautifully crafted and caressed melodic line and filigree. Noting the inclusion here of Michel Legrand’s Windmills Of Your Mind – which is given an arresting reading – those whose tastes incline more to the sharper side of things might presume that what we have here is but agreeable background fare for dinner parties.

But that would be their loss. Like Kind Of Blue – an album which has provided just such fare for many such a party – Mare Nostrum III works on various levels: repeated listening confirms the breadth and depth of the tempered structural intelligence which underpins its mellifluous grace. As Paul Bley said, power can come from a quiet place. And in its own way, this is a plenty powerful record.

Simon Adams - 24 June 2021
With the death of bassist Israel Crosby in 1962, the original Ahmad Jamal Trio made famous by the live Pershing sets of 1958 came to an end. Two years...