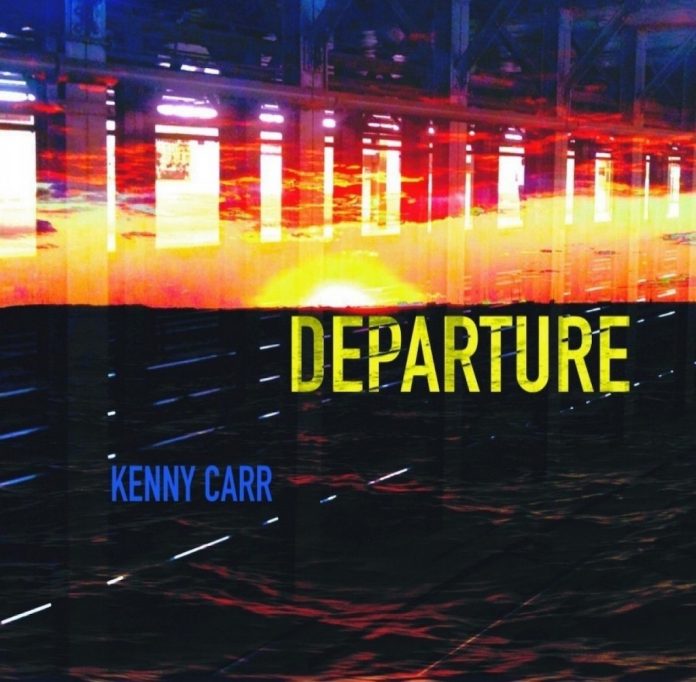 Kenny Carr is a New York based guitarist who played with Ray Charles for 10 years. Departure is his sixth album as leader and reunites him with the band members who played together on his 2014 outing Idle Talk. The band are a four-piece unit comprising saxophone, percussion and drums, with Carr on guitar and guitar synthesisers.

The musicianship is first-class – as you would expect from someone who earned Ray Charles’s confidence for so long – and Carr, in turn, chooses his companions well. McCaslin makes a perfect foil for Carr’s guitar, with the two of them alternating solos throughout.

The compositions are all original and each band member is given ample opportunity to shine. The album is not totally guitar dominated, contrary to what one might expect from a guitarist leader; but there is not a hint of Carr’s time playing with Charles. When it comes to any trace of soul, R & B or blues this album is as sanitised as a bottle of bleach. If you want these influences, check out Carr’s 2007 album Changing Tide particularly Blues For Ray.

Here, Carr relies heavily on synthesised guitar – giving the the album almost a prog-rock/jazz-rock feel at times. Clearly he is not the only guitarist to do so and the likes of Abercrombie, Frisell, Metheny and McLaughlin have tread this road before.

Intervals opens the album at a cracking tempo with Carr and McCaslin trading solos. Time Change is a more abstract and more atmospheric affair, whilst Tell Me I Can’t is certainly the funkiest track. Warmth is well titled with a delicate guitar solo by Carr, whilst D & P is a pacey, driven affair allowing both guitar and saxophone plenty of freedom. Evolutions is by far the heaviest rock-style track (thanks to Wollesen’s impressive drumming) and wouldn’t disgrace an ELP album.

The title track, Departure, reinstates a more delicate mood with some fine atmospheric saxophone and guitar. Waiting continues on the same theme with McCaslin and Carr weaving some fine solos around each other. Bear Call is more of a blowing session whilst Parallels changes down gear once again, showcasing just how well Carr and McCaslin work together.

I liked this album a lot but some niggling doubts remain. The album title Departure just about sums up the paradox. As a musical journey it seemed to lack any clear starting point and any clear end destination. Whilst contemporary in many ways it still has a dated feel to it. Maybe that is because synthesised guitar was very much a product of the 1970s and Carr uses it creatively but generously. I would also have liked to have heard a bit more warmth in the playing. The album has great appeal but defining its target audience is not so easy.

Elliot Marlow-Stevens - 16 February 2020
Pianist May Fall leads The May Fall Crew in an exciting, varied album of modern jazz, with a heavy pop and funk influence. Joined by Niv Majar on drums,...