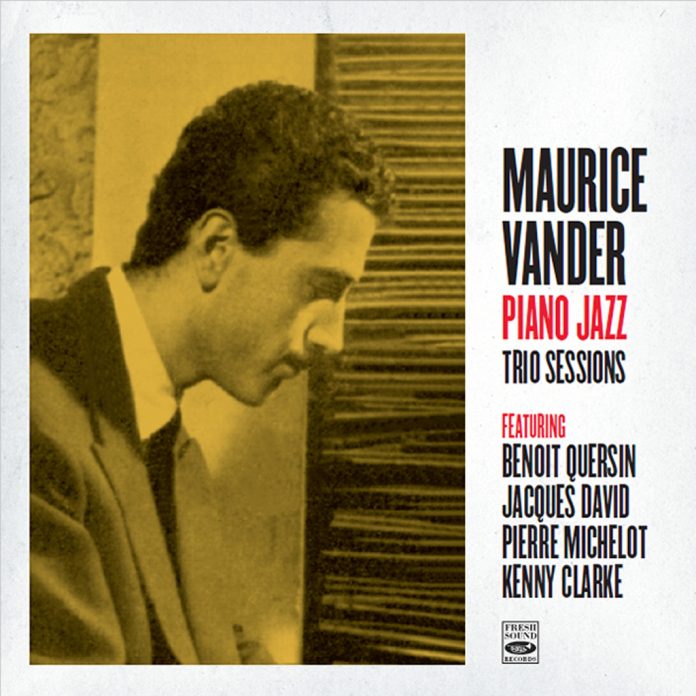 I’m sure I’m not the only person who has never heard of Maurice Vander before, but I am so glad Fresh Sound has introduced us at last. Vander (1929–2017) epitomised 1950s Paris jazz, where a club and cabaret pianist could make a stylish impression.

Vander made his debut in 1948 and was soon playing with Django Reinhardt, Clifford Brown, and Bobby Jaspar, his recording debut as leader – tracks (1) – occurring in 1955 when he was supported by a trio of Benoît Quersin on bass and Jacques David on drums. He was soon in great demand to support visiting musicians such as Chet Baker and Sarah Vaughan, as well as working with home-grown talent such as Stéphane Grappelly and Barney Wilen.

He toured the Middle East for two years before returning to Paris in 1960, where he worked at the Blue Note club, this time with a trio of Pierre Michelot on bass and the expat bebop drummer Kenny Clarke, caught here live but without an audience on tracks (3) from 1961.

With both trios, Vander played only standards, each one showcasing his characteristically clear yet delicate attack, his easy-on-the-ear sound, and flawless technique. His improvisations were inspired, his effortless swing capable of communicating both great warmth and a reflective tenderness. True, he didn’t stray far from the melody, but he always sustained interest without any great harmonic complexity. He didn’t have the virtuosity of, say, his contemporary Martial Solal or the sensitivity of René Utreger, but he had his own stylish integrity.

In total he recorded a total of 20 albums as leader and more than 70 as a sideman, latterly playing with French pop stars and regularly working as a studio artist. When he eventually died in 2017, aged 88, he was fondly remembered as one of the most esteemed French pianists of his generation. This fine set – an object lesson in how to reissue recently neglected material – is a fitting tribute.

Discography
(1) Pennies From Heaven; I Remember April; The Nearness Of You; Strike Up The Band; How About You;? There Will Never Be Another You; Everything Happens To Me; Get Happy; (2) Fascinating Rhythm; My Funny Valentine; One Bass Hit; Autumn In New York; Cheek To Cheek; Embraceable You; A Star Fell On Alabama; Because Of You; Stella By Starlight; Love For Sale; Our Love Is Here To Stay; Night And Day; Dream; Mack The Knife; Over The Rainbow; My Funny Valentine; Body And Soul; Ebb Tide (72.37)
Vander (p) plus: (1) Benoît Quersin (b); Jacques David (d). Paris, 1955. (2) as (1) 2 February 1956. (3) Pierre Michelot (b); Kenny Clarke (d). Blue Note club, Paris, 1961.
Fresh Sound Records FSR-CD 974