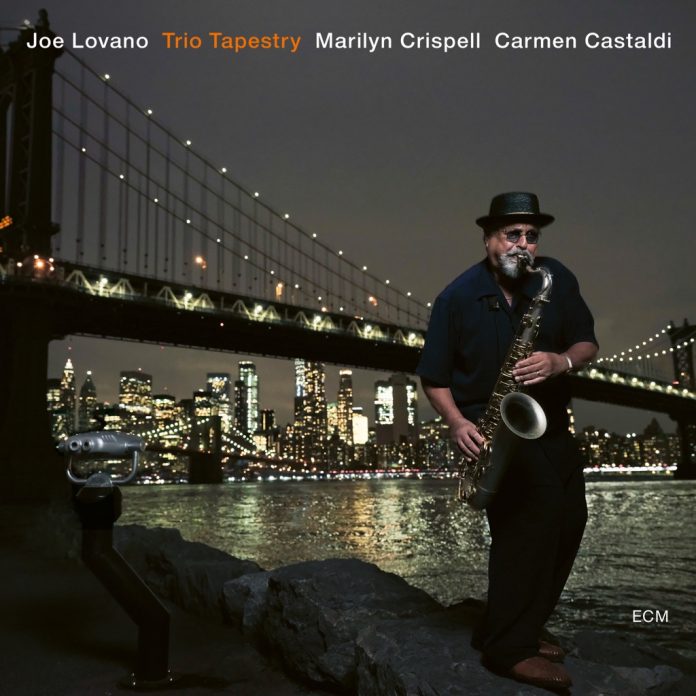 Despite previous “sideman” appearances on ECM this is Joe Lovano’s debut on the label as a leader, accompanied by Marilyn Crispell with whom he has touched base over the decades and drummer Carmen Castaldi. The latter was a teenage friend from Cleveland and fellow Berklee attendee in the early 70s.

The minimalist approach to much of the music creates a chamber-like atmosphere only interrupted towards the end of the disc, the busy nature of Spirit Lake and the relative boldness surrounding The Smiling Dog coming as surprises after the preceding rumination.

We are informed by the press release that “Each of the pieces here flowers from a melodic core informed by twelve-tone processes”, an appreciation of which the saxophonist took on board during his time in the company of Gunther Schuller.

Such pieces as Razzle Dazzle and Sparkle Lights imply something upbeat but the trio stay subtle, these – like the other compositions – strong on melodic content without having memorable themes to hang your hat on.

The leader had clear ideas as to how Trio Tapestry should unfold and it’s easy to understand why he would have been pleased with the end result.

Nigel Jarrett - 17 December 2020
JJ readers are informed enough to know that Manteca is a Dizzy Gillespie, Chano Pozo and Gil Fuller tune. But it's also a Canadian band of longstanding. They might...