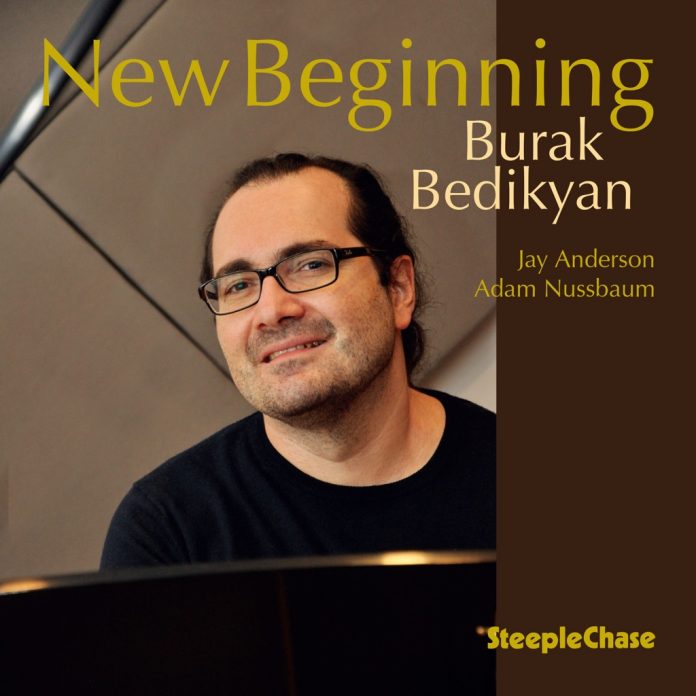 The fourth album from pianist Burak Bedikyan reflects his recent move to New York from Istanbul, and the jazz scene he has experienced living there. The album is largely made up of improvisational pieces from one session, showcasing Bedikyan’s expertise, but there are also a few original compositions interspersed.

It should be noted that this was the first time the trio had played together, which is remarkable as their musical output is very well balanced. On Surya, for example, the three musicians react to each other with great attention, building slowly to a frantic crescendo.

As the recording is from one session, you get to experience the development of each track, such as the seamless movement from Prelude to Rue Dauphin. There is also a lot of variety. Epilogue comprises angular piano, supported by a walking bass line from Jay Anderson, whereas Things We Are starts with solo ballad-style piano, before bass and drums enter to allow Bedikyan space to improvise.

The composed pieces offer a refreshing contrast to the improvised session, Ayca and No Complaints in particular are excellent. All tracks on the album are original, with the exception of Stella By Starlight, to which the trio gives a loose and dynamic interpretation.

New Beginning is a fantastic album, full of creativity and skill. This recording will appeal to anyone who enjoys listening to three very accomplished improvisers demonstrating a seriously high level of musicianship, making great use the trio format, and creating new and original music spontaneously.

Hugh Rainey - 12 November 2020
Bechet was already resident and immensely popular in France when he returned to New York to record these studio sessions for Blue Note in the early 50s. The dominating...