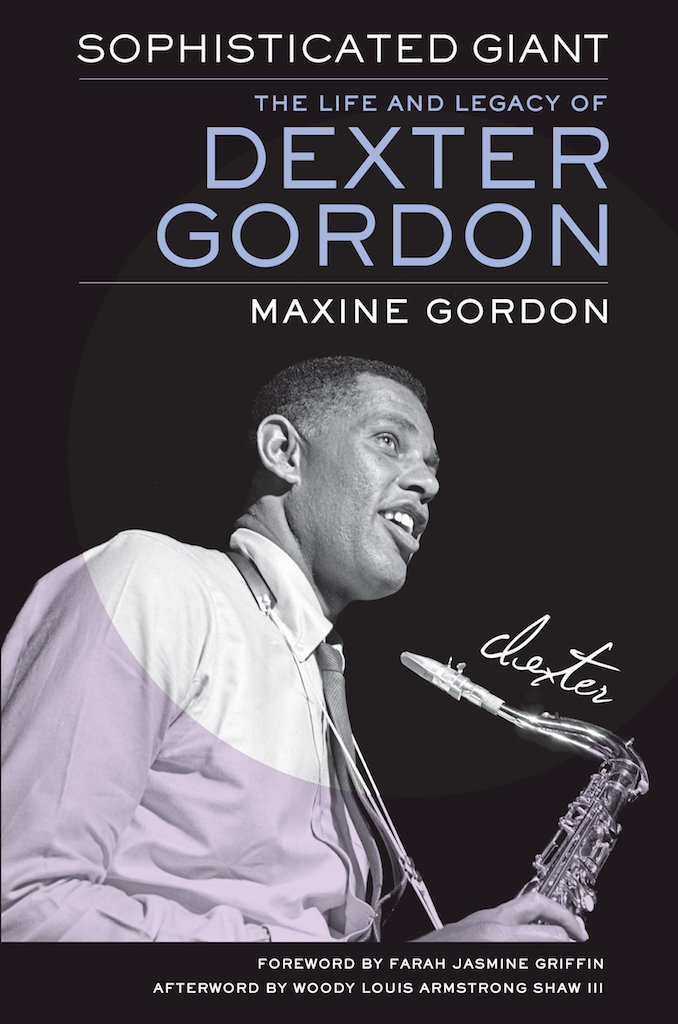 We are fortunate indeed in that Maxine Gordon is such an accomplished writer (except for the fact that everyone that Dexter ever meets seems to be “his good friend”) and that she was married to Dexter Gordon for the later part of his life.

One was already familiar with the drug horror stories of Parker et al, but the way the unstoppable tide of drug addiction swept, almost casually, through jazz in the 40s and 50s is graphically encapsulated in the book.

It’s hard to reconcile the fact that Dexter was locked up in one of America’s most severe gaols. The 6’ 6” giant was a gentle, friendly man who never did any criminal harm to anyone. Under the mantle of his addiction was a kind, talented man, a great artist in his chosen medium. But, as he became addicted, his poorly hidden infringements of the law, so palpable to the police, pulled him into trouble in the States, in Paris and even in his beloved Denmark, where everyone was on his side. After his conviction in Paris, he was banned from Denmark and he was much relieved when he was eventually allowed back in, where he could be given the essential support of his doctor to help him give up his burden.

Gordon had such a bad time with arrests and gaol during the 50s that he refused to ever talk about the decade, and Maxine has had to piece together details from documents and surviving friends to tell his story.

‘The major achievement that he is noted for is being the first to bring bebop to the tenor sax. Sonny Rollins credits him emphatically with having done this’

In some ways Dexter was one of the great players, and in others he wasn’t. He could sustain a tenor solo that went on for over 10 minutes without repeating any of his ideas, but sometimes some of those ideas weren’t as brilliant as they might have been. I think he was at his greatest when he lovingly took a good ballad apart and then adorned it with his improvisations.

The major achievement that he is noted for is being the first to bring bebop to the tenor sax. Sonny Rollins credits him emphatically with having done this, and of course he did it without in any way copying Parker. He was also influenced heavily by Lester Young and Ben Webster, becoming a colleague of Ben’s in his later Scandinavian years.

The young man learned his musical craft in big bands led by Louis (whom he idolised), Billy Eckstine and Lionel Hampton. He expanded his talent as a regular in the marathon jam sessions of the West Coast, where he was famously partnered by other tenor players such as the superior Wardell Grey and Teddy Edwards and Gene Ammons.

Dexter needed a safe, affectionate setting to flourish, and he found it year after year at Copenhagen’s Jazzhuis Montmartre. He played there for season after season and it was a characteristic of his that, wherever he played, audiences wanted him back and he tended to play for weeks at a time in one club.

As Ms Gordon arrives chronologically at each of Dexter’s albums, personnels are listed and the material recorded is detailed. Very often financial details are given, and Ms Gordon makes rewarding use of the correspondence between Dexter and Frank Wolff of Blue Note, the saxophonist’s major label.

Dexter seemed to consider himself extremely lucky to have had so much success. But under his pleasure at this we find a modest man, grateful for his talent and ever eager to please the next audience. He was a prime influence on innumerable young greats. On the only occasion I saw him I heard him playing duets with Stan Getz, one of his earliest protégés. I shall never forget their It’s You Or No One.

Ms Gordon’s book is packed with dense information – it would be: she was his wife and his closest researcher – and there are many anecdotes that have been retrieved from those who knew him. Each time a new musician – Sonny Clark, for example – makes an appearance in Dexter’s life, Ms Gordon has researched and added a biography for him. The book gets on comfortably exploring the many avenues of his eventful life, just like he did with his ballads.

Graham Colombé - 28 March 2019
No attempt has yet been made to release in a single set Ivie’s more than 60 recordings with Ellington together with the dozen titles she recorded after retiring from...