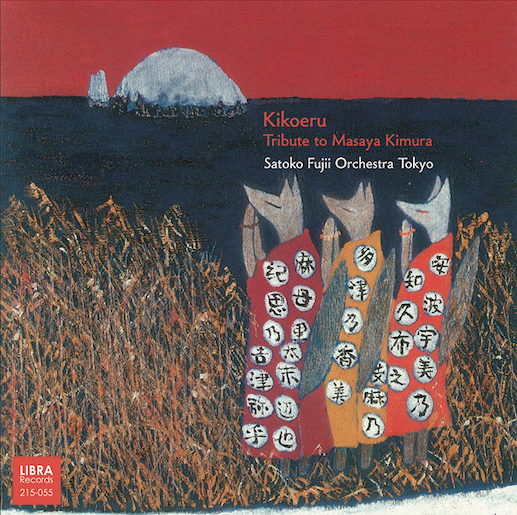 On the 9th of October 2018 the Japanese pianist, composer and bandleader Satoko Fujii celebrated her 60th birthday. I know it’s considered ungentlemanly to mention a lady’s age, but she freely proclaimed the year of her turning 60 with a CD of the month marathon, issuing a dozen albums on Libra, Long Song and ASM. Kikeoru, released in December, concluded the project.

She has recorded over 80 albums as leader or co-leader and I confess I had heard only a handful of them. Until being immersed in the Marathon project and spotlighting it couple of times on my local radio show during 2018 I had not been aware of the full and formidable range and depth of her music. This album provides an excellent summation, a wide-ranging panorama of her work.

In Canadian jazz magazine Cadence Bob Rusch dubbed Fujii “the Ellington of free jazz”. That’s not an unreasonable assessment though one might equally well liken her to Charles Mingus, Graham Collier, Carla Bley or Sun Ra for adventurousness and intensity, but her music is distinctive, standing alongside those other explorers, not in their shadow.

She studied classical piano until she was 20, when she turned to jazz, attending Berklee from 1985 to 1987. Then, after a six-year return home, she signed up at the New England Conservatory where her teachers included George Russell, Cecil McBee and Paul Bley. In addition to the numerous ensembles that she has led or co-led, she has worked in other people’s bands and with dance troupes. Her own ventures include solo recitals, various duos, several adventurous small groups (acoustic and otherwise, some embracing rock and fusion elements) and the orchestras she has established in various cities, including Kobe, Nagoya, Berlin, Chicago, New York and this one, founded in 1997.

The album’s dedicatee was the tenor saxophonist who was a member of the orchestra from the start until his death two years ago. The title means “can hear” and references an occasion when, waiting at a rural railway station, Fujii was aware of sound of indeterminate origin. The title track deftly mixes jazz with evocations of the traditional shakuhachi, an end-blown bamboo flute that, to quote the title of a classic composition, seems to aspire to the sound of the wind in the reeds. It is typical of the tracks on this set: the music has inner steel, yet is clothed in profound sensitivity and emotion.

Inspiration from her environment is common: Amadare portrays a storm from initial raindrops, evoked by scattered notes from the horns, the patterns retained in staccato chords whilst soloists personify the more boisterous aspects of the weather. Farewell is a direct tribute to Kimura, an emotional solo by Matsumoto eventually emerging from long, sombre, beautifully-textured brass and reed chords followed later by a sensitive passage from Nagata. Neppa means heatwave and is just what it says on the label, with scorching solos from Hayasaka, Watanabe and Takahashi.

The last two compositions are by Tamura, Fujii’s husband. Stop And Go opens with a free-form brawl which resolves first into a jazz-rock section then a headlong passage with much lip-busting (or finger-busting in Nagata’s case) playing all round. Ah Dadada is, as the title might suggest, a playful and somewhat daft piece, dispersing the intensity of the rest of the session.

Gordon Jack - 13 December 2019
This was one of the few studio recordings by this short-lived edition of the Jazz Messengers and although now 60 years old, it still sounds fresh and pristine today....