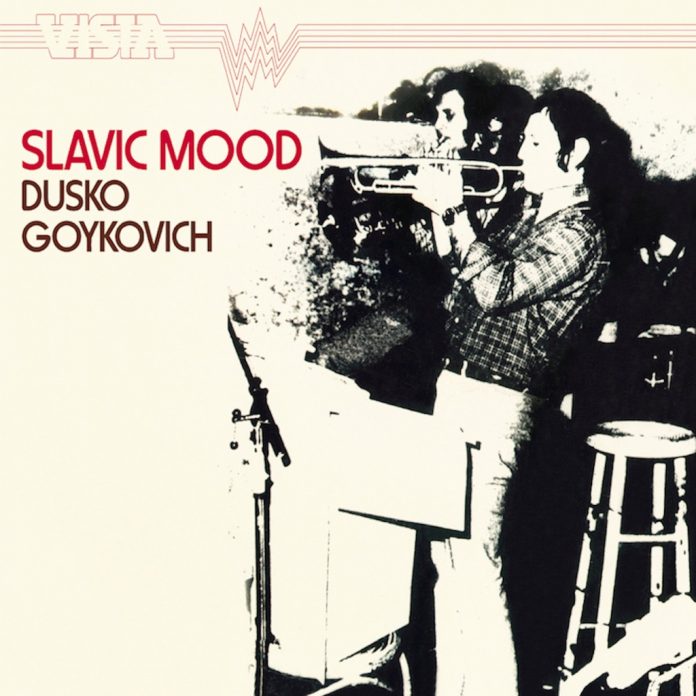 I think I still have this as an RCA (Italy) LP and I do remember that it got heavy rotation when it was first bought and always attracted interested comment.

Goykovich’s interest in using Balkan melodies and tonalities in a basic swing-to-bop idiom was distinctive right from the beginning. While he fitted brilliantly into brass sections, whether as a second to Maynard Ferguson or in the Francy Boland ensemble or Peter Herbolzheimer’s now underrated orchestra, he was always at his most distinctive when following the line of his own debut (?) Swinging Macedonia. I put in the query mark because I’m sure I have an even earlier thing under his name called Blumen Für Die Dame, though where it lurks in the Lost Ark-ive I have nary a clue. (Any info about this one welcome.)

Goykovich has a lovely, open, bright tone, that dissolves a bit when he plays flugelhorn, though there’s no indication of that here. All the tunes on Slavic Mood are originals, many of them marked with a minorish (but not always definable) feel and a strong hint of pentatonicism (though again it isn’t always easy to locate precisely).

There’s not much obvious influence from Balkan Brass, the likes of Baban Marković and other popular bandleaders, and more from Serbian/Bosnian folk forms, though these largely favour native woodwinds over brass. Goykovich probably got away and playing for Kurt Edelhagen before this stuff started to influence his jazz practice.

The two best known tunes are probably Old Fisherman’s Daughter and the lovely East Of Montenegro, which gave its name, I think, to the album after this. Sometimes, you get the feeling that Dusko is doing little more than balkanizing, though not in the usual sense, very familiar jazz chords and contrefacts – Flying Rome would be a/the obvious example – but there’s no denying his originality, and the band he assembled for the Rome session is well up to the job (Vince Benedetti!) but with special mention due to drummer Joe Nay, who did sterling service on the European scene, but died early after a road crash.

A lovely reissue that ought to refocus interest on the 87-year-old Goykovich, whom I can vouch was still playing live (and well) in 2013 and who released the so-so Latin Haze the following year. Brazil eventually beckoned, but he was always more comfortable with his ears set to Belgrade.