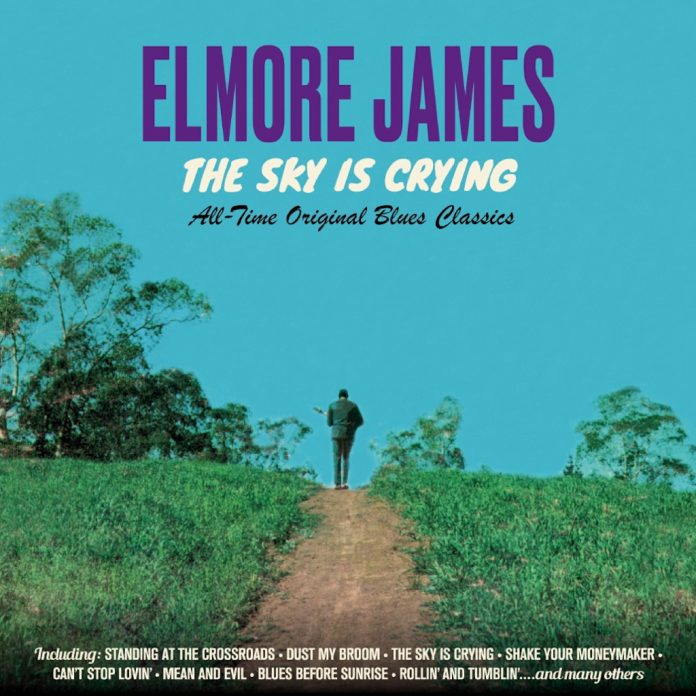 Cheeky Frank Zappa, the sleevenotes for The Sky Is Crying remind us, claimed that Elmore James “only knew one lick, but you had the feeling that he meant it”. Zappa was wrong about the lick, but spot on about James’s commitment. Across all 29 of the tracks on The Sky Is Crying James puts his heart and soul into his playing and his singing – the energy is palpable.

James is accompanied by a variety of musicians, mostly under the moniker of The Broom Dusters and including bona fide legends such as Ike Turner (piano) and Willie Dixon (bass) on a couple of tracks. Known or unknown, these musicians seem to be just as fired up as James and the digital remastering of the original recordings cranks things up even higher – this is a loud album.

James’s place in music history owes much to his slide guitar playing and to a handful of songs – Dust My Broom (adapted from Robert Johnson’s I Believe I’ll Dust My Broom and featuring Sonny Boy Williamson II on harmonica), The Sky Is Crying (covered by Stevie Ray Vaughan and Eric Clapton among others) and Shake Your Moneymaker (recorded by Peter Green’s Fleetwood Mac) immediately spring to mind. They’re all here, all glorious, but plenty of other numbers run them close.

Wild About You may use the familiar Broom riff, but it still sounds fresh and vibrant. On the instrumental Bobby’s Rock, James’s electric guitar cuts sharply through the pounding rhythm section and added tenor sax. James’s voice shouldn’t be underestimated either. Even when he’s struggling with poor recording quality (as he is on Fine Little Mama) its power is still obvious: give him an understated, sparse, backing and a tale of lost love (Sunnyland, for example) and that voice rings every last emotion out of the simplest of lyrics.

Elmore James is not the most obvious influence on jazz guitarists – although he did record an instrumental called Elmore’s Contribution To Jazz which turns up here with added vocals in the guise of Can’t Stop Lovin’ You. Modern jazz guitarists are probably well ahead of James as far as technique is concerned, but few can match his vivacious guitar sound or his talent for powerful, catchy, riffs. If I had to make the choice, I’d take vivacity and catchy riffs over technique any day of the week.

Discography
The Sky is Crying; Dust My Broom; Knocking at Your Door; Shake Your Moneymaker; Mean and Evil; Can’t Stop Lovin’; Strange Kinda Feeling; I Was a Fool; Rollin’ and Tumblin’; Standing at the Crossroads; Dark and Dreary; Rock My Baby Right; Long Tall Woman; I Held My Baby Last Night; Late Hours at Midnight; Wild About You; Bobby’s Rock; Take Me Where You Go; The 12 Year Old Boy; The Sun is Shining; Fine Little Mama; No Love in My Heart (for You); Dust My Blues; Sunnyland; Look on Yonder Wall; Stranger Blues; Done Somebody Wrong; Blues Before Sunrise; Goodbye Baby (78.12)
James (v, elg) plus small groups, mostly in Chicago, New Orleans or New York, 1951-61.
Soul Jam Records 600922