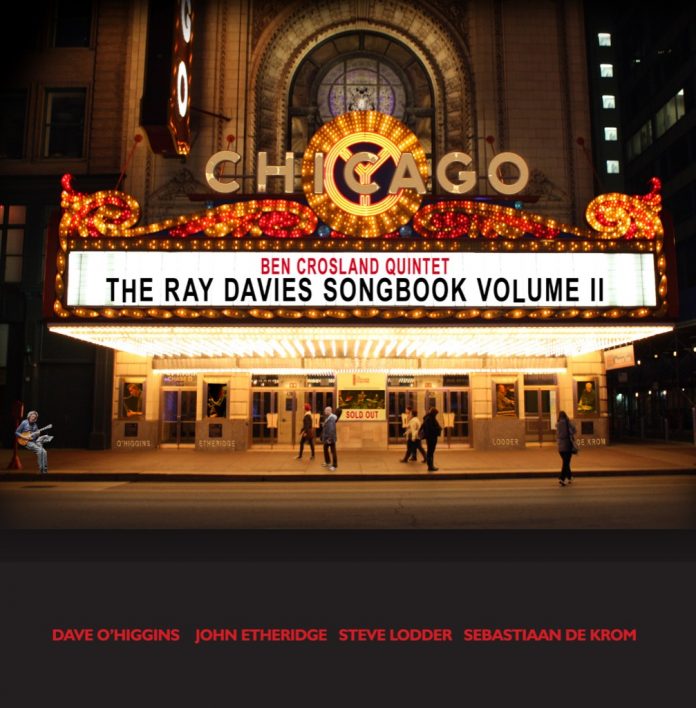 Goodness knows Ben Crosland really likes The Kinks or more specifically the remarkable repertoire of Sir Raymond Davies CBE, but then what’s not to like? Davies has, after all, composed some of the most memorable pop songs of the 20th century.

Crosland’s previous release, The Ray Davies Songbook (Jazz Cat Records, 2016) comprised some of The Kinks’ greatest hits such as All Day And All Of The Night, Waterloo Sunset and You Really Got Me but with this second volume Crosland has nailed almost all the remaining Davies biggies and a few that weren’t.

Some songs rework better than others. One prime example is the opener Sittin’ On My Sofa which is given a uplifting boogie-style treatment. Another unequivocal success is the freewheeling Where Have All The Good Times Gone, adorned with Dave O’Higgins’ swirling soprano and John Etheridge’s feisty guitar; its uncompromising interpretation is absolutely critical. The same applies to David Watts wherein the orchestration benefits from the off-kilter nature of the song. The arrangement of Autumn Almanac renders it pleasant enough but generally the songs seem to work best when they’re more deconstructed and the pop idiom is less rigorously adhered to.

Others don’t fare quite as well. I’m Not Like Everybody Else, for example, originally a moody number evincing a lyric of resigned despondency, here is relaxed almost to the point of jauntiness. In fairness, with swirling electric piano to the fore it hardly suffers from this approach and the melody, executed on soprano saxophone, becomes secondary to the upbeat feel of the piece.

Some of the covers occasionally veer towards the maudlin (Days) or almost stray into anodyne territory (Lola) but then are invariably rescued by Etheridge’s electrifying guitar solos. Altogether, Crosland has once again executed an album populated by enchanting readings of the oeuvre of one of pop’s most brilliant stars and true songwriting geniuses.

Andy Hamilton - 04 January 2022
Theodor Adorno was an aesthete who attacked the bourgeois concept of a "feast for the ears". But I have to say – bourgeois that I am – that this...